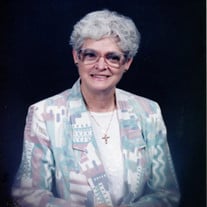 LaDonne Lambert, age 87, of Marion, IL and formerly of Carbondale, IL, passed away peacefully at 6:20 p.m. on Sunday, August 25, 2019, in Shawnee Christian Village of Herrin, IL. She was born on Saturday, September 12, 1931, in Marion, the daughter of James John and Grace Mae (Peterson) Lane. LaDonne attended school in Marion and was a graduate of Marion High School Class of 1950. She then attended at Southern Illinois University of Carbondale. She was united in marriage to Howard Lambert on Saturday, May, 19, 1951, in Marion, and together they shared over 36 years of marriage until his death on Tuesday, August 18, 1987. LaDonne’s working career was as a Real Estate Agent. She and her husband owned and operated the Lambert Real Estate Agency of Carbondale for many years. Later she worked for many years as church secretary for Murdale Baptist Church of Carbondale until her retirement at the age of 70. She was a former member of Murdale Baptist Church of Carbondale and was one of the charter members of the Church Clown Ministry and sang in the choir. After she moved to Marion, she became a member of First Baptist Church of Marion and was a member of Heartland Senior Circle Hospital Auxiliary of Marion. LaDonne was a talented artist and loved to draw and write poetry. She also would design and create Faberge Eggs and was excellent writing in calligraphy. In her spare time she enjoyed traveling and was always ready for any kind of shopping. She loved all of her family and was always interested in their many activities, especially those of her grandchildren and great grandchildren. The many memories that have been created will be cherished by those she leaves behind. She is survived by three daughters and two sons-in-law, Marilyn Lambert of West Carrollton, OH, Cynthia and James Yusko of Gilbertsville, KY, and Lori and Jon Lam of Makanda, IL; seven grandchildren, Melissa Neal and husband, Dan of Riverside, OH, Doug Byrne and wife, Casey of West Carrollton, OH, Rebecca Grace Muir and husband, John R. of Woodstock, GA, Christina Ryan and husband, Mickey of Brentwood, TN, Eric Lam and wife, Heidi of Vienna, IL, Shelby Lambert and Tanner Lambert both of Fruitland, MO; twelve great grandchildren, Jacob Neal, Thomas Neal, Liam Byrne, Mesa Byrne. Taitum Byrne, Zachary Muir, Emma Muir, Audrey Ryan, Christopher Ryan, Clara Lam, Brayden Downey and Seth Downey; daughter-in-law, Sudena Lambert of Fruitland, MO, other extended family and many friends. She was preceded in death by her parents, husband; son, James Howard Lambert on December 27, 2017; two sisters, Janet Pinnow and one as an infant. Arrangements were entrusted to Wilson-McReynolds Funeral Home, 900 N. Court St., Marion. The visitation was from 12:00 p.m. until 2:00 p.m. on Friday, August 30, 2019, at the funeral home. During the time of visitation a “Reflection of Life” DVD Memorial Tribute featuring special people, places and events in LaDonne’s life was presented to the family and friends. Following the time of visitation the funeral service was at 2:00 p.m. with LaDonne’s grandson, Pastor Eric Lam presiding and was assisted by Chaplain Matt Crain. Also during the service was a time of “Sharing of Memories” with many attending sharing a special memory about LaDonne. The prelude and postlude musical selections were presented by pianist, David Webber. Special vocal musical selections presented during the service were “He Touched Me”, In the Garden”, It Is Well With My Soul” and “How Great Thou Art” all by Jon Lam, Christine Ryan and Audrey Ryan with pianist, David Webber accompanying. Interment followed next to her husband in Maplewood Cemetery of Marion. Pallbearers were Jim Yusko, Jon Lam, Doug Byrne, Tanner Lambert, John Muir and Bill Pinnow. For those who preferred, memorial contributions may be made to either or both; “Hospice of Southern Illinois” and/or “Shawnee Christian Village” and mailed in care of Wilson-McReynolds Funeral Home, 900 N. Court Street, Marion, IL 62959. Memorial envelopes were available at the funeral home. For additional information call the funeral home at 618-993-2131.

LaDonne Lambert, age 87, of Marion, IL and formerly of Carbondale, IL, passed away peacefully at 6:20 p.m. on Sunday, August 25, 2019, in Shawnee Christian Village of Herrin, IL. She was born on Saturday, September 12, 1931, in Marion, the daughter... View Obituary & Service Information

The family of Dena LaDonne Lambert created this Life Tributes page to make it easy to share your memories.

LaDonne Lambert, age 87, of Marion, IL and formerly of Carbondale,...

Send flowers to the Lambert family.