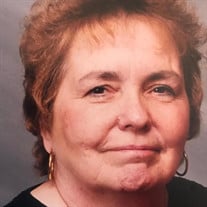 Dolores K. “Dody” Marshall, age 85 of West Frankfort, IL, passed away peacefully at 1:12 p.m. on Monday, June 3, 2019, in Metropolis Rehabilitation and Health Care Center in Metropolis, IL. She was born on Wednesday, September 20, 1933 in Jeisyville, IL, the daughter of Dominic and Blanche (Bouvier) Pasqueno. Dolores grew up and attended school in Taylorville and later moved to West Frankfort, IL where she made her home and raised her family. She was of the Christian faith and was actively involved in Second Baptist Church and in later years attended First Baptist Church in West Frankfort, IL. She was actively involved in the Franklin County Republican Party and worked for many years as an Election Judge. She enjoyed volunteering at Union Hospital and with the Franklin County Historical Society gift shop and Red Geranium Tea Room. In the early 70’s Dolores worked for the Mark Twain Boat Company in West Frankfort and for thirteen years was a Correctional Officer at the Shawnee Correctional Center in Vienna, IL and later at the Big Muddy Correctional Center in Benton, IL and retired in 1999. She is survived by two daughters and sons-in-law, Pamela and Michael Navickis of Rockford, IL and Paula and John Gossett of West Frankfort; two sons and one daughter-in-law, Kenneth Dale Stebbins of West Frankfort and Harry and Robbie Marshall of Vienna, IL; ten grandchildren and spouses, Kimberly and Daniel Scherer, Tony Navickis and fiancé, Colleen Dickey-Hughes, Andrew and Ashley Navickis, Heather and Brian Carroll, Andrea and Micah Parsons, Shawn and Laura Gossett, Tim and Whitney Stebbins, Kenneth D. and Tracey Stebbins, Jr., Clinton and Tonya Marshall and Jessica and Parker Windhorst; twenty-two great-grandchildren; two brothers, Frank Pasqueno of Rockford, IL and Jerry Riddle of West Frankfort; other extended family and many friends. She was preceded in death by her parents; sister, Frances Sondell; brother, Bill Riddle and daughter-in-law, Robin Stebbins. Arrangements were entrusted to Wilson-McReynolds Funeral Home, 900 N. Court St., Marion. The visitation was from 11:30 a.m. until 1:00 p.m. on Friday, June 7, 2019, at the funeral home. During the time of visitation a “Reflection of Life” DVD Memorial Tribute featuring special people, places and events in Dolores’ life was presented to the family and friends. Following the time of visitation the funeral service was at 1:00 p.m. with Dr. Brett Beasley presiding. The prelude and postlude musical selections were a medley of family selected recorded vocal musical selections. Special recorded vocal musical selections presented during the service were “In the Garden” and “Amazing Grace” both by Alan Jackson and “Days of Elijah” by Robin Mark. Burial followed in the Ebenezer Cemetery near Galatia, IL. Pallbearers were Clinton Marshall, Timmy Stebbins, Buddy Stebbins, Tony Navickis, Andrew Navickis and Dan Scherer. For those who preferred, memorial contributions were made to either or both; “The Tent Makers Project” and/or “Franklin County Historical Society” and mailed in care of Wilson-McReynolds Funeral Home, 900 N. Court Street, Marion, IL 62959. Memorial envelopes were available at the funeral home. For additional information please call the funeral home at 618-993-2131.

The family of Dolores K. "Dody" Marshall created this Life Tributes page to make it easy to share your memories.