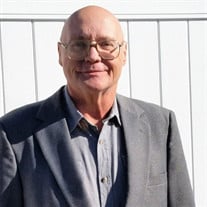 Donald Ray “Donnie” Viernum, age 55, of Buckner, IL, passed away peacefully at 3:11 a.m. on Sunday, May 22, 2016, at his home. He was born on Saturday, October 15, 1960, at West City, IL the son of Ardell and Jean (Anderson) Viernum. Donnie attended school in Benton, IL and was a graduate of Benton High School Class of 1979 and continued his education attending at Rend Lake College. His working career, mainly working out of the Laborers Local Union No. 773 in Marion, was in construction with the building of bridges, road, hospitals, hotels and pipelines mainly in Southern Illinois until his retirement in 2014. Donnie was a Christian and was of the Baptist faith. He was a member of the Italian Club Fraternal Order of the Miner of Coello, IL and the Laborers Local Union No. 773 in Marion. He also was a former member of the Moose Lodge in West Frankfort, IL and the Eagles Club in Benton. In his spare time he enjoyed antiquing, barbecuing and spending time with his family. He is survived by two daughters and son-in-law; Lindsey Boston and fiancé Joshua Davenport both of Benton and Crystal and Daniel Fletcher of West Frankfort; three grandsons , Harley Lane, Drayden Kole and Axel Dwain; sister and brother-in-law, Sharon and Bill Wholt of Henderson, NC; companion, Mary Reynolds of Sesser, IL; niece, Erin White and husband Jordan of Chester, IL; nephews, Michael Kohl of Van Buren, AR, Jeff Kohl of St. Charles, IL, Nicki Wiggs of Chester, IL and Andy Ramsey of Buckner; great nephew, Jesse White of Chester, IL, other extended family and many other lifelong friends. He was preceded in death by his parents and two sisters, Brenda Hughes and Mary Chamness. Arrangements for Donald Ray Viernum were entrusted to Wilson-McReynolds Funeral Home, 900 N. Court St., Marion, IL. In accordance with his wishes there were no public services. For additional information please contact the funeral home by calling 618-993-2131.

The family of Donald Ray "Donnie" Viernum created this Life Tributes page to make it easy to share your memories.