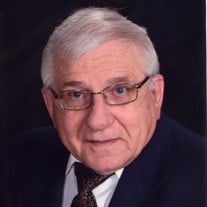 Donald Heinle, age 71, of Marion, IL, passed away peacefully with his family by his side, at 4:20 a.m. on Monday, February 8, 2016, in Parkway Manor of Marion, IL. He was born on Thursday, September 21, 1944, in Hebron, ND the son of Emanuel J. and Ida (Schneider) Heinle. Don attended school in Hebron and was a graduate of Hebron High School Class of 1962. He continued his education by attending North Dakota State College of Science in Wahpeton, ND and received his degree in Computer Science. Don answered the call of this nation by serving in the United States Army in the Infantry during the time of the Vietnam War from July 28, 1965, until the time of his honorable discharge on July 27, 1967, with the rank of Specialist 4th Class. His working career was as a computer programmer for banking, insurance and educational institutions in North Dakota and Illinois. He was first united in marriage to Claudia Hellman on Monday, September 1, 1969, in the Sacred Heart Church of Glen Ullin, ND and together they shared nearly 19 years of marriage until her death on Monday, August 1, 1988. He later was united in marriage to Connie (Kaffai) Teske on Saturday, July 28, 1990, in St. Joseph Catholic Church of Marion, IL and together they have shared over 25 years of marriage. Don was a member of St. Joseph Catholic Church of Marion and the Knights of Columbus Council 6210 of Marion. He is survived by his wife, Connie Heinle of Marion; two daughters and sons-in-law, Shelly and Mark Carey of Troy, IL and Kristi and Cole McMichael of Bethalto, IL; two sons, Kip Heinle of Troy, IL and Lance Heinle of Evanston, IL; two step-sons, David Teske and his wife Melissa and Jonathan Teske and his fiancé April Haar all of Anna, IL; six grandchildren, Danielle and Bradynn Carey and Emma and Savanah Heinle all of Troy, IL and Kale and Kace McMichael both of Bethalto, IL; five step-grandchildren, Dale Prater, Drue Teske and John, Elijah and Audrey Haar all of Anna, IL; two brothers and one sister-in-law, Harlen Heinle of Dickinson, ND and Gaylen and Shirley Heinle of Aberdeen, SD; five brothers-in-law, James Hellman and his wife Edith, Ted Hellman, Jerald Hellman, Don Hellman and his wife Cheryl and Fred Hellman, other extended family and many friends. He was preceded in death by his parents, first wife; fathers-in-law and mothers-in-law, John and Mary (Paul) Hellman and Erwin and Leonora (Seibold) Kaffai; brother-in-law, Roger Hellman, sister-in-law, Alvina (Dassinger) Heinle and niece, Chelsie Heinle. Arrangements for Donald Heinle were entrusted to Wilson-McReynolds Funeral Home, 900 N. Court St., Marion, IL. The visitation was from 9:00 a.m. until 11:00 a.m. on Saturday, February 13, 2016, at the funeral home. Following the time of visitation the funeral service was at 11:00 a.m. with Rev. Monsignor Thomas Flach, V.F. presiding. Comments of memory were presented by Don’s wife, Connie and sons, Lance and Kip. The prelude and postlude musical selections were presented by pianist, Lori Creamer. Special instrumental musical selections presented during the service were “In the Garden”, “Amazing Grace” and “How Great Thou Art” all by pianist, Lori Creamer. Interment followed in Rose Hill Cemetery of Marion. Pallbearers were Kip Heinle, Lance Heinle, David Teske, Jonathan Teske, Cole McMichael and Mark Carey. “Taps” was presented at the graveside by Steve Bubanovich on the trumpet. After “Taps” the flag was presented to Connie. Following the committal service at the cemetery the family and friends gathered at St. Joseph Catholic Church for a meal and continued time of fellowship and support. For those who preferred, memorial contributions were made to either “St. Joseph Catholic Church” or “Hospice of Southern Illinois” and mailed in care of Wilson-McReynolds Funeral Home, P.O. Box 370, Marion, IL 62959. Memorial envelopes were available at the funeral home. For additional information please contact the funeral home by calling 618-993-2131.

The family of Donald Heinle created this Life Tributes page to make it easy to share your memories.

Send flowers to the Heinle family.