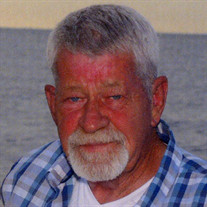 Donald Mays, age 70, of Marion, IL passed away peacefully in the arms of his wife surrounded by family after saying their final goodbyes in Deaconess Gateway Hospital of Newburgh, IN, at 3:19 p.m. on Saturday, January 9, 2016. He was born on Friday, April 20, 1945, in Herrin, IL the son of Valley D. and Geneva (Keller) Mays. Donald attended school in Sunnyside and Freeman Spur, IL and was a graduate of Herrin High School Class of 1965. He answered the call of this nation by serving in the United States Army for a career of 22 years, serving in Korea during the late 1960’s and early 1970’s and also in Kuwait during “Operation Desert Storm”. After his period of faithful service he was honorably discharged at Fort Campbell, KY with the 101st Airborne Division with the rank of Master Sergeant in August of 1991. During this period of service he received numerous certificates, awards, ribbons and medals. After he was discharged, he worked until 1995 in civil service and maintenance at Fort Campbell, KY, then returned to Illinois and worked as an over the road truck driver traveling across the country. In 1997 he worked for the Post Office of Carbondale, IL until he retired in 2009 but continued to drive from Carbondale to Springfield delivering mail. During his career he received certificates for his work performance with the post office. He then began driving for South Central Transit of West Frankfort, IL for a few years and later was a supervisor for Centerstone of West Frankfort, which he enjoyed very much meeting with his clients at the north and southbound rest area of Interstate 57, until his health declined. Donald was united in marriage to Rebecca L. Hoy on Saturday, June 30, 1990, at Aldersgate United Methodist Church of Marion and together they have shared over 25 years of marriage. “How lucky I am to have something that makes saying goodbye so hard”, Becky. He was a member of Aldersgate United Methodist Church of Marion. He also was a member of Baker-Ladd V.F.W. Post No. 1567 of Herrin, IL and Laborer’s Local 773. He was a #1 fan of Cardinal baseball, enjoyed fishing, horseshoes, washers, bowling and never liked to lose. He was everyone’s “Uncle Don” and was always available when others needed him. He never said “no” when asked, and always wanted to go and serve others. He was Rebecca’s rock as well as to everyone else. He is survived by his wife, Rebecca L. Mays of Marion; mother, Geneva Hutton Mays of Herrin, IL; four sons and three daughters-in-law, Donnie F. and Lisa Mays of Indianapolis, IN, J. Scott Mays of Joplin, MO, Mark W. and Donna Mays of Sesser, IL and Shane M. and Kate Mays of Joplin, MO; three daughters, Kim S. Johnson of Herrin, IL, Jodie L. Mays of Buffton, SC and Faye F. Mays of Logan, UT, nineteen grandchildren, Shawn Mays, Donald Mays III, Kyla Jordan, Kaylee Trent, Corey Hamblin, Dustin Hamblin, Kristina Osbourne, Dakota Borchelt, Mallory Mays, Chloe Mays, Elijah Mays, Caleb Mays, Silas Mays, Keira Mays, John Mays, Jimmy Mays, Jamie Lynn, Hazel Mays Casperson and Lily Mays Gibson; four great grandchildren, Aidan Ward, Caden Pike, Graysen Hans and Jayce Ann Meader; three brothers and one sister-in-law, Harold and Cora Mays of Princeton, IN, George Mays and Larry Mays both of Energy, IL; two sisters and brothers-in-law, Charlotte and Charles Kerrigan and Annette and Dale Branche all of Freeman Spur, IL, a host of nieces and nephews, other extended family and many friends. He was preceded in death by his father; three brothers, Eugene, Vern and twin brother Ronald Mays and two sisters, Delores Mays and Ruth Tolbert. Arrangements for Donald Mays were entrusted to Wilson-McReynolds Funeral Home, 900 N. Court St., Marion, IL. The visitation was from 4:00 p.m. until 7:00 p.m. on Tuesday, January 12th, at the funeral home. The visitation resumed from 9:30 a.m. until 10:30 a.m. on Wednesday, January 13, 2016, at Aldersgate United Methodist Church, located at 1201 N. Fair Street, of Marion, IL. During the time of visitation a “Reflection of Life” DVD Memorial Tribute featuring special people, places and events of Donald’s life was presented to the family and friends. Following the time of visitation the funeral service was at 10:30 a.m. with Rev. Dr. Tim Ozment presiding. Comments of memory were presented by family friend Rev. Ralph Brandon, Donald’s daughter Kim Johnson and his sons Donnie Mays and Mark Mays. Rev. Dr. Tim Ozment also read comments of memories given to him by other family members. The prelude and postlude musical selections were presented by pianist, Judy Hopkins. Special musical selections presented as congregational hymns were “Great Is Thy Faithfulness”, “How Great Thou Art” and “Victory In Jesus” led by Mark Fisher and accompanied by pianist Judy Hopkins. Interment followed at 12:30 p.m. in Mound City National Cemetery of Mound City, IL. Pallbearers were PFC Christopher Henderson, SPC Dayna Brown, SPC Erik Clapper, SPC William Ott, SGT Jeremie Moon and SSG Bradley DuClose. Military honors were accorded at the graveside by Pulaski County Members of the Area Ritual Team and the Illinois National Guard Funeral Honors Burial Detail of Marion. Presentation of the flag to Donald’s wife Becky was by SSG Bradley DuClose. Following the committal service at the cemetery the family and friends gathered back at Aldersgate United Methodist Church for a meal and continued time of fellowship and support. For those who preferred, memorial contributions were made to “Rebecca L. Mays” and were used to make a donation to a military service organization in Donald’s name. Contributions were mailed in care of Wilson-McReynolds Funeral Home, P.O. Box 370, Marion, IL 62959. Memorial envelopes were available at the funeral home and the church. I know you are listening from the heavens above. There’s nothing that I value more than your love. No matter where I am or what I’m doing, Your memories will always keep me smiling. For additional information please call the funeral home at 618-993-2131.

Donald Mays, age 70, of Marion, IL passed away peacefully in the arms of his wife surrounded by family after saying their final goodbyes in Deaconess Gateway Hospital of Newburgh, IN, at 3:19 p.m. on Saturday, January 9, 2016. He was born on... View Obituary & Service Information

The family of Donald Mays created this Life Tributes page to make it easy to share your memories.

Donald Mays, age 70, of Marion, IL passed away peacefully in...

Send flowers to the Mays family.