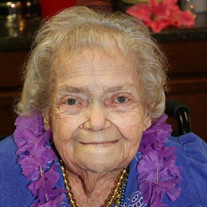 Doris A. Gilley, age 87, of Marion, IL, passed away peacefully at 1:40 p.m. on Saturday, November 21, 2015, in Parkway Manor of Marion, IL. She was born in Marion, on Monday, April 30, 1928, the daughter of Claude W. and Martha Jane (Treece) Russell. Doris attended school in Marion and was a graduate of Marion High School. She was united in marriage to James E. Gilley on Friday, July 16, 1948, in Marion, and together they shared 59 years of marriage until his death on July 19, 2007. Doris was of the Baptist faith. Her working career was with General Telephone of Marion as a telephone operator from 1947 to 1965. When her son, Jim was born she decided to remain at home seeing to the needs of her family and managing her home. Later in 1984, Doris started working at Blue Cross Blue Shield in Marion, as a claims adjuster and remained there until her retirement in 1990. She is survived by her son and daughter-in-law, James R. and Shari Gilley of Marion, IL; two grandsons, Brockton James Gilley and Brandon Russell Gilley both of Marion, IL; granddaughter, Emily Ann Gilley of Carterville, IL, other extended family and many friends. She was preceded in death by her parents and husband. Arrangements for Doris Ann Gilley were entrusted to Wilson-McReynolds Funeral Home, 900 N. Court St., Marion, IL. The graveside service was at 11:00 a.m. on Tuesday, November 24, 2015, in Maplewood Cemetery of Marion, IL with Rev. David Gilley presiding. Those wishing to attend the graveside service gathered at the cemetery prior to the time of the service. Interment followed next to her husband. For additional information please contact the funeral home by calling 618-993-2131.

The family of Doris A. Gilley created this Life Tributes page to make it easy to share your memories.

Send flowers to the Gilley family.