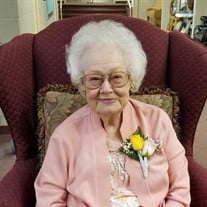 Dorothy E. “Mimi” Thompson, age 103, of Marion, IL, passed away with her family near, at 6:45 pm on Friday, July 30, 2021, at her home. She was born on May 19, 1918, in Carrier Mills, IL, the daughter of Freeman Edward and Nettie Jane (Chamness) Dodds. Dorothy attended school in Marion, and was a graduate of Marion High School Class of 1936. She continued with her education attending at Brown’s Business College of Marion. During the time of WW II, Dorothy help serve this country by working for the Department of Defense at Wright-Patterson Air Force Base of Dayton, OH. She was united in marriage to Warren John Thompson on February 7, 1946, in Dayton, OH, and together they shared over 23 years of marriage until his death on April 28, 1969. After her marriage she remained at home seeing to the needs of her family and managing her home. The family moved back to the Marion area in 1952, and have been here ever since. After the death of her husband in 1969, and her family was older she returned to working outside of the home for WGGH Radio of Marion, as a secretary until her retirement. She has been a member of First Baptist Church of Marion, since 1952, and also taught Sunday school. Her family was a very important part of her life and she was always interested in all of their many activities, especially those of her grandchildren, great grandchildren and great-great grandchildren. The many memories that have been created will be cherished by those she leaves behind. She is survived by two daughters and sons-in-law, Julie and Don Barnaby and Carol and Steve Rix all of Marion; three grandchildren, Wendi Tennyson, Jimmy Rix and wife, Melissa and Amy Wilson and husband, Andrew all of Marion; nine great grandchildren, Jessica Doyle and husband, Matt of New Lenox, IL, and Brandon Tennyson, Lauren Tennyson, Alexis Edwards, Maddi Rix, Nolan Rix, Adelynn Wilson, Andi Wilson and Austin Wilson all of Marion; three great-great grandchildren, Hayden and Eila Doyle both of New Lenox, IL, and Kayvia Anderson-Tennyson of Marion, a host of nieces, nephews, other extended family and many friends. She was preceded in death by her parents, husband and brother, George Dodds. Arrangements have been entrusted to Wilson-McReynolds Funeral Home, 900 North Court Street, Marion. The visitation will be on Saturday, August 7, 2021, from 11:00 am to 1:00 pm at the funeral home. Following the visitation, the memorial service will be at 1:00 pm with Dr. Bob Dickerson presiding. Interment will follow next to her husband in Rose Hill Cemetery of Marion. The family requests for those who prefer, memorial contributions be given to “First Baptist Church Building Fund” and/or “Hospice of Southern Illinois.” Memorial contributions may be mailed in care of Wilson-McReynolds Funeral Home, 900 N. Court Street, Marion, IL, 62959. Memorial envelopes will be available at the funeral home. To leave an online condolence of memory please visit our website at www.wilsonmcreynolds.com or for additional information call the funeral home at 618-993-2131.

The family of Dorothy Esther "Mimi" Thompson created this Life Tributes page to make it easy to share your memories.