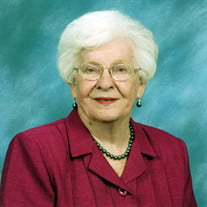 Dorothy E. Parson, age 102, of Troy, Illinois, died Friday, July 22, 2016 at Eden Retirement Center in Glen Carbon, Illinois. She was born on August 17, 1913, in Marion, Illinois, the daughter of the late Lee and Lillie (Roberts) Baysinger. Her sister Mary Ellen Fozard survives. Her brother Robert preceded her in death. Dorothy graduated from Southern Illinois Normal College (the precursor to SIUC) in 1934 and briefly worked as a teacher near Paulton, Illinois teaching all 8 grades in one of the proverbial one room rural schools. At that time and place a marriage would have violated her teaching contract. Not wanting to lose her contract, she and the love of her life, Paul Parson eloped to Mayfield, Kentucky where they were secretly married in the First Baptist Church on June 6, 1936. In 1937 they moved to Mt. Vernon, Illinois where a son, Paul L. was born in 1941. Shortly thereafter they moved to St. Louis where a son, Jack D. was born in 1943. Eventually they settled in the St. Louis suburbs where they raised their family. She was always active in school, church and community organizations and continued her love of children and theirs of her. She was an inveterate bridge player and avid seamstress. She was an active PEO member wherever she went. In 1968 they moved to Chicago and in 1973 they retired to Carbondale, Illinois where her sister Mary Ellen Fozard and her family were life time residents. It was also where their son Paul, his wife Carole and their Granddaughter Amy lived. Their son Jack, his wife Nancy, and their children Nia and Daniel were located nearby for a period of time and thereafter she was a frequent guest at their home in Mt. Pleasant, South Carolina. Dorothy loved being a Grandmother as well as honorary “Granny” to dozens of friends and neighbor kids through the years. In 1987 her husband Paul preceded her in death. When Paul L. and Carole retired to Troy, Illinois in 2001 she moved with them and lived in the other side of their duplex. Her Granddaughter Amy and Amy’s husband Mike McGarr lived nearby in Edwardsville, Illinois. She soon became an active and doting Great Grandmother to Nia & Pablo’s daughter Amelia, Daniel & Molly’s son Benjamin and Amy & Mike’s daughters Katie and Lauren. In recent years she resided at Eden Retirement Center in Glen Carbon, Illinois. We are grateful to them for the care and consideration she has received and the kindness and helpfulness of the many, many people who work night and day to keep such a facility humming. Her ashes are being interred at Rose Hill Cemetery in Marion, Illinois. To celebrate her life a memorial service will be held at Rose Hill Cemetery at 11:00 A.M. on Saturday, September 3 at the grave site. All friends and family are invited to attend. She attended First Christian Church Disciples of Christ in Carbondale for the 28 years she lived there. Memorial gifts, if desired, may be made there - 306 West Monroe Street, Carbondale, IL 62901

The family of Dorothy E. Parson created this Life Tributes page to make it easy to share your memories.

Send flowers to the Parson family.