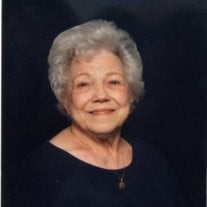 Dorothy Janette Tondini, age 88, of Marion, IL passed away at 4:25 p.m. on Monday, February 25, 2013, in Memorial Hospital of Carbondale, IL. She was born on Tuesday, August 26, 1924, in South Haven, MI the daughter of Howard and Pearl (Goodwin) Booton. Dorothy’s family moved to this area when she was about 12 years old and she attended school in Creal Springs, IL. Later, Dorothy went on to attend Southern Illinois University and received her Certificate in Cosmetology in 1957. Shortly after she received her certificate and got her license she opened her business, “Dorothy’s Beauty Salon” in Marion and operated it for the next fifteen years until her health forced her to close in 1972. She then went on and began working for the Hampton Care Center of Herrin, IL as their cook for several years. She later began working for Fountain’s Care Center in Marion, IL as their Activity Director until she decided to retire in the late 1980’s. Dorothy was united in marriage to Joe D. Tondini on Monday, December 31, 1945, in Peoria, IL and together they shared nearly 47 years of marriage until his death on May 12, 1992. She was a member of Second Baptist Church of Marion, IL. In her spare time she enjoyed crocheting and knitting, reading and playing games on her computer. Her family was always a very important part of her life, seeing to their needs when they were young and later as they got older taking interest in their many different activities. As the family expanded to grandchildren and great grandchildren she enjoyed the many times they all gathered together. Those now left behind will cherish the many memories that have been created. She is survived by three sons and two daughters-in-law, David E. Tondini and fiancé, Jenise Clark, Daniel and Linda Tondini and Kevin D. and Dawn Tondini all of Marion, IL; eight grandchildren, Matthew Tondini and his wife, Erin of Goshen, NY, Steven Tondini and his wife, Debbie of Columbia, SC, Jeffrey Tondini and his wife, Jennifer of Lexington, SC, Angela Chamness and her husband, Jason of Silver Dale, WA, Julia Colp and her husband, Jason of Harrisburg, IL, Carrie Jo Tondini of Marion, IL, Joseph Tondini of Marion, IL and Michael Tondini of Marion, IL; nine great grandchildren, Madison, Reilley, Matthew, Airanna and Jacob Tondini, Faith and Hunter Chamness and Pyper and Brogan Colp; two brothers and one sister-in-law, Howard Booton of Prairie Grove, AR and James and Dorothy Booton of Louisburg, KS, other extended family and many friends. She was preceded in death by her parents, husband; sister, Annabelle Davis and brother, Morris Booton. Arrangements for Dorothy Janette Tondini were entrusted to the Wilson-McReynolds Funeral Home, 900 N. Court Street, of Marion. The time of visitation for family and friends was on Thursday, February 28th, from 5:00 p.m. until 7:00 p.m. at the funeral home. The funeral service was at 11:00 a.m. on Friday, March 1, 2013, at Wilson-McReynolds Funeral Home with Rev. Kevin McNeely presiding. The prelude and postlude musical selections were presented by pianist, Lori Creamer. Special vocal musical selections presented during the service were “Old Rugged Cross”, In the Sweet Bye and Bye” and “How Great Thou Art” all by Lori Creamer who accompanied herself on the piano. Interment followed next to her husband in White Oak Cemetery located south of Marion near the Lake of Egypt. Pallbearers were Matthew Tondini, Jason Colp, Steven Tondini, Joseph Tondini, Jeffrey Tondini and Michael Tondini. After the committal service at the cemetery the family and friends gathered at Dorothy’s home for a meal and continued time of fellowship and support. For those who preferred, memorial contributions were made to “Hospice of Southern Illinois”. Memorial contribution envelopes were available at the funeral home or were mailed in care of Wilson-McReynolds Funeral Home, P.O. Box 370, Marion, IL 62959. For additional information please contact the funeral home by calling 618-993-2131.

Dorothy Janette Tondini, age 88, of Marion, IL passed away at 4:25 p.m. on Monday, February 25, 2013, in Memorial Hospital of Carbondale, IL. She was born on Tuesday, August 26, 1924, in South Haven, MI the daughter of Howard and Pearl (Goodwin)... View Obituary & Service Information

The family of Dorothy Janette Tondini created this Life Tributes page to make it easy to share your memories.

Dorothy Janette Tondini, age 88, of Marion, IL passed away at...

Send flowers to the Tondini family.