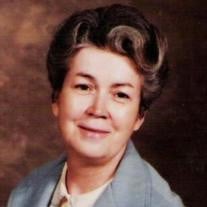 Dorothy Winn, age 84, of Marion, IL passed away peacefully at 5:50 a.m., on Sunday, June 3, 2012, in Shawnee Christian Nursing Center in Herrin, IL. She was born on Sunday, July 24, 1927, in Marion, IL the daughter of Carl and Louise (Gamble) Armes. Dorothy was united in marriage to Max E. Winn on Sunday, June 8, 1947, in Marion, IL and together they shared over 35 years of marriage until his death on October 10, 1982. Dorothy attended school in Marion and was a graduate of Marion High School. She was a sales clerk for many years at the Marion Ben Franklin Store and last worked in the fabric department before retiring in 1979. She was a member of the First Apostolic Church of Marion and was an active member for many years. "To her family she was a jewel; a rare cut diamond. She will be missed greatly by not just her family but by all who knew and loved her. She never met a stranger and her sweet spirit will always be remembered." She is survived by her two sons, Daryl Winn and wife, Lucinda of Herrin, IL and Scott Winn of Marion, IL; sister-in-law, Juanita Reynolds of Decatur, IL, two nephews, other extended family members, her church family and many friends. She was preceded in death by her parents and husband. Arrangements for Dorothy Winn were entrusted to Wilson-McReynolds Funeral Home, 900 N. Court Street, of Marion, IL. A time of visitation was between the hours of 6:00 p.m. and 7:00 p.m. on Tuesday, June 12, 2012, at First Apostolic Church located at 923 N. Bentley St., Marion, IL. Following the time of visitation a Celebration of Life Memorial Service was at 7:00 p.m., with Rev. R. G. Wall officiating assisted by Brother Keith Younkin and Brother Steve Miller. The service began with a video recorded of Mrs. Winn a few weeks prior to her passing away singing “This World Is Not My Home” followed by the congregation singing “This World Is Not My Home” and “The Love of God”, Tammy Patterson presented “Surely the Presence of the Lord Is In This Place” and the service concluded with the congregation singing, “When We All Get To Heaven”. In lieu of flowers, contributions were made to the family to help cover the cost of Dorothy’s final expenses. Memorial contribution envelopes were available at the church, or were mailed in care of Wilson-McReynolds Funeral Home, P.O. Box 370, Marion, IL 62959. For additional information please call the funeral home at 618-993-2131.

The family of Dorothy Winn created this Life Tributes page to make it easy to share your memories.

Dorothy Winn, age 84, of Marion, IL passed away peacefully at...

Send flowers to the Winn family.