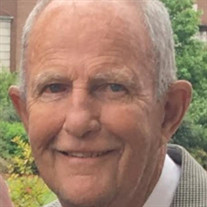 Dr. Earl Dale Long of Marion, IL, loving husband of Sandy and father of Scott and Steven, passed away peacefully at the age of 78, on Thursday, June 24, 2021, at 12:06 pm in Memorial Hospital of Carbondale, IL. Earl was born on September 19, 1942, in West Frankfort, IL, the son of Earl Harold and Velva Maxine (Howell) Long. He was united in marriage to Sandra Ann Chance on December 21, 1963, in the East Benton Baptist Church of Benton, IL, and together they have shared nearly 58 years of marriage. Earl attended West Frankfort High School, Southern Illinois University and received his Doctor of Chiropractic degree from National College of Chiropractic located in Chicago, IL, in 1966. He was a chiropractor in Marion for 47 years. After retirement, he drove a bus for Marion School District. Earl was very involved in professional organizations. He was elected to the Board of the Illinois Chiropractic Society in 1972. He held several offices in the Illinois Chiropractic Society and was a two-term president in 1983-1984. He was named “Chiropractor of the Year” in 1984. He also was chairman of the Illinois Chiropractic Cost Utilization and Claims Review Committee in 1985, a member of the Peer Review Committee in 1985, served on the Illinois Hospital Licensing Board from 1976-1984, and received the “Illinois Chiropractic Society Distinguished Service Award” in 1984. He was a member of Second Baptist Church in Marion. Earl also devoted time to many organizations in Marion. He was president of Marion United Way Fund in 1971, chairman of the Williamson County Heart Fund in 1972, president of the Marion Lion’s Club from 1972-1973, served on the Marion Unit #2 School Board from 1975-1979, was a lifetime member of Fellowship Masonic Lodge No. 89 A.F. & A.M. of Marion, member of the Scottish Rite Masonic Bodies Valley of Southern Illinois and member of the Williamson County Shrine Club for over 50 years. Earl was a youth baseball coach. He coached the Fabick Pony League team and the All-Star team for many years. In his free time, he enjoyed playing golf and he even had a hole in one. He enjoyed watching all five of his grandchildren play sports. This included going on numerous short trips to watch college softball. In addition, Earl was a lifetime fan of St. Louis Cardinals, SIU Salukis and University of Illinois. Earl is survived by his wife, Sandy Long of Marion, two sons and daughters-in-law, Scott (Rae) Long of Springfield. IL, and Steve (Kristy) Long of Marion; five grandchildren, Allison Long and fiancé, Nicholas Koch of Alton, IL, Samantha Long of Franklin, TN, Josie Long of Oxford, MS, Bailey Long of Marion and Brody Long of Marion; mother-in-law, Hazel Price of Benton, IL; sister-in-law, Mary Lou (Terry) Thomas of Benton, IL; niece, Tera (Ryan) Keller of O’Fallon, IL, nephew, Todd (Michele) Thomas of Benton, IL; great nieces, Courtney, Caroline, Carlianne Keller all of O’Fallon, IL, and great nephews, Chase and Kyle Thomas of Benton, IL; cousins, Jerry Reach of Marion, Brenda Koller of Marion, Sara Roth of Carbondale, IL, Linda Moore of Johnston City, IL, Randy Long of Herrin, IL, Larry Long of Johnston City, IL, and Harold Long of Atlanta, GA and many friends. He was preceded in death by his parents. Arrangements have been entrusted to Wilson-McReynolds Funeral Home, 900 North Court Street, Marion, IL. The visitation will be on Saturday, July 3, 2021, from 10:00 am to 12:00 noon at the funeral home. Following the time of visitation, the funeral service will be at 12:00 noon with the Pastor Paul Lee presiding. Interment will follow in Lakeview Cemetery of Johnston City, IL. The family requests for those who prefer, memorial contributions be given to “Shriner’s Hospitals for Children” or “Second Baptist Church of Marion.” Memorial contributions may be mailed in care of Wilson-McReynolds Funeral Home, 900 N. Court Street, Marion, IL, 62959. Memorial envelopes will be available at the funeral home. For additional information please call the funeral home at 618-993-2131.

Dr. Earl Dale Long of Marion, IL, loving husband of Sandy and father of Scott and Steven, passed away peacefully at the age of 78, on Thursday, June 24, 2021, at 12:06 pm in Memorial Hospital of Carbondale, IL. Earl was born on September 19,... View Obituary & Service Information

The family of Dr. Earl Dale Long created this Life Tributes page to make it easy to share your memories.

Send flowers to the Long family.