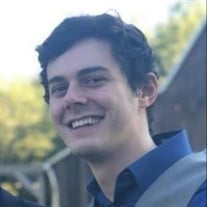 Drew Johnson, age 26, of Marion, IL, passed away unexpectedly on Sunday, September 6, 2020, near Jefferson City, MO, the result of a single vehicle accident. He was born on Friday, September 17, 1993, in Marion, IL, the son of Kendall and Linda (Jordan) Johnson. Drew attended school in Marion, and was a graduate of Marion High School Class of 2012. He continued with his education attending at John A. Logan College of Carterville, IL, where he received his Associate Degree. He was a member of Aldersgate United Methodist Church of Marion. Drew was a talented chef who was happiest in the kitchen cooking for his family and friends. Currently he was working as a manager for Texas Roadhouse and was working at their Jefferson City restaurant. He had worked at many of their different restaurants in the Midwest region while waiting for the completion of their new restaurant in Marion. Earlier in his working career he had worked at both Mary’s in Herrin, and Kokopelli in Marion. He loved his family and the many times they all were together. The memories created will now be cherished by those he leaves behind. He is survived by his parents, Kendall D. and Linda D. Johnson of Marion; two brothers and one sister-in-law, Kyle Johnson of the North side Uptown District of Chicago, IL, and Troy and Delaney Johnson of Marion; grandmother, Sharon Johnson of Marion; grandfather, Bobby Hodge of Marion, and many aunts, uncles, cousins, other extended family and many friends. He was preceded in death by his maternal grandparents, Phillip Jordan and Rosa Jordan Hodge and his fraternal grandfather, Ray Johnson. Arrangements were entrusted to Wilson-McReynolds Funeral Home, 900 N. Court St., Marion. The visitation was from 11:00 a.m. to 1:00 p.m. on Saturday, September 12, 2020, at the Aldersgate United Methodist Church, located at 1201 North Fair St., Marion, IL. During the time of visitation a “Reflection of Life” DVD Memorial Tribute featuring special people, places and events in Drew’s life was presented to the family and friends. Following the time of visitation the funeral service was at 1:00 p.m. with Pastor Lance Leeds presiding. During the service a special DVD Tribute of Drew with the special musical selection “When I Get Where I’m Going” by Brad Paisley and Dolly Parton accompanying was presented. Following the service interment was private in Maplewood Cemetery of Marion, next to his maternal grandparents. After the committal service at the cemetery the family and close friends gathered at Drew’s parent’s home for a meal and continued time of fellowship and support. Since Drew loved food and cooking, the family requested for those who preferred, memorial contributions be made to the “Marion Ministerial Alliance Food Pantry”, and mailed in care of Wilson-McReynolds Funeral Home, 900 N. Court St, Marion, IL, 62959. Memorial envelopes were available at the church. For additional information please call the funeral home at 618-993-2131.

Drew Johnson, age 26, of Marion, IL, passed away unexpectedly on Sunday, September 6, 2020, near Jefferson City, MO, the result of a single vehicle accident. He was born on Friday, September 17, 1993, in Marion, IL, the son of Kendall and... View Obituary & Service Information

The family of Drew Anthony Johnson created this Life Tributes page to make it easy to share your memories.