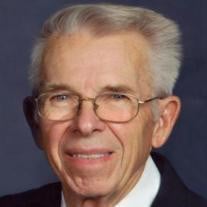 Dwight O. Tanner, age 74, of Marion, IL, passed away with his family at his side at 5:20 a.m., on Sunday, December 11, 2011, at his home in Marion, IL. He was born on Sunday, May 30, 1937, in the Palzo Community of Southeastern Williamson County, IL, the son of Tennyson and Ivo F. (Owens) Tanner. Dwight answered the call of this nation by serving in the United States Army, with the pipeline division, and was honorably discharged on May 30, 1966, with the rank of Sergeant. He was united in marriage to Gloria Ann Smith on August 29, 1970, in Number 6 Church located east of Johnston City, IL and together they have shared over 41 years of marriage. He was a member of Third Baptist Church of Marion, IL where he served as deacon. Prior to this, he was a member and deacon of Energy Baptist Church of Energy, IL. He will be remembered by many as an “Awesome Man of God” always being involved in the church he was attending. For many years, he was in charge of the church volley ball activities at both Energy Baptist and Marion Third Baptist Church on Tuesday and Friday nights. He had a great sense of humor and loved pulling practical jokes on both family and friends. Dwight was a tool and die machinist by trade. He was very creative and talented, being able to design and build anything, whether woodcraft or metalwork. He and Gloria opened Gourmet Corner in Marion, where he made many of the items they sold including the Wind Mills and other crafts. He was fond of the “High Roller Bikes” he built and was often seen riding in parades in the area. Dwight and the family loved to travel and hike when they had the opportunity. Most of all, he will be remembered as a loving husband, father, grandfather, great grandfather and good friend who was always willing to give a helping hand to others in need. He will be remembered and missed by all who knew and loved him. He is survived by his wife, Gloria A. Tanner of Marion; daughter and son-in-law, Tracy L. and Paul Gibson of Broken Arrow, OK; son, Tennyson Scott Tanner of Marion; eleven grandchildren, Kyle Gibson and his wife, Jessica, Dwayne Gibson and his wife, Jennifer, Rex Gibson and his wife, Krissi, Sherrie Gibson, David Gibson, Colby Gibson, Elaine Gibson, Darien Gibson, Shana Gibson, Nathaneal Gibson and Charles “Chuck” Gibson; six great grandchildren, KayLee and Augustus Gibson, Cadence and Wyatt Gibson, and Carter and Brooklynn Gibson; two sisters and brothers-in-law, Ruth and John Womack of Ozark, IL and Vivian and Herbert Soberg of Marion; two brothers and sisters-in-law, Gerald and Delores Tanner of Creal Springs, IL and Lyman and Ann Tanner of Marion; aunt, Marilyn Tuttle of West Frankfort, IL, other extended family and many friends. He was preceded in death by his parents. Arrangements for Dwight O. Tanner were entrusted to the Wilson-McReynolds Funeral Home, 900 N. Court Street, of Marion, IL. A time of visitation for family and friends was from 5:00 p.m. until 8:00 p.m. on Tuesday, December 13th, at Marion Third Baptist Church, located at 1102 E. Boulevard Street, in Marion. During the time of visitation a “Reflection of Life” DVD Memorial Tribute featuring special people, places and events of Dwight’s life was presented to the family and friends. The funeral service was on Wednesday, December 14, 2011, at 11:00 a.m. at Marion Third Baptist Church with Pastor Scott Kallem presiding. A reading titled “Tribute to Dad & Mom”; written by his daughter, Tracy, was presented by Pastor Scott Kellem. Special recorded vocal musical selections “Daddy’s Hands” and “Simple, Devoted and True” both by Dwight’s daughter, Tracy was presented during the service. Interment followed in Rose Hill Cemetery of Marion, IL. Pallbearers were Aaron Henry, Steve Mitchell, Kent McWilliams, George Williams, Steve Plumer and Brian Rehbein. Military honors were accorded at the graveside by members of the V.F.W. Heyde-Pillow Post No. 1301, American Legion Post No. 147 and the Illinois National Guard Flag Detail all of Marion, IL. Those participating were Commander, Larry Largent; Chaplain, Dan Fruge; Officer of the Day and Bugler, Bill Deaton; Color Guard, Ron Ganzer and Jesse James; National Colors, Ernie Rinella; VFW Colors, Ralph DeVasier; Firing Squad, Nate Hopkins, Ned Padget, Fred Read, Bill Reynolds, Ron Russell, Brian Samuel and Jerry Swisher. Illinois National Guard Flag Detail members participating were SPC Jeremie Moon and PVT Garrett Lukens. Presentation of the folded flag to Gloria was by PVT Garrett Lukens. Following the committal service at the cemetery the family and friends gathered back at Third Baptist Church for a meal and continued time of fellowship and support. For those who preferred, memorial contributions were made to “Third Baptist Church Building Fund”. Memorial contribution envelopes were available at the church or were mailed in care of Wilson-McReynolds Funeral Home, P.O. Box 370, Marion, IL 62959. For additional information please call the funeral home at 618-993-2131.

The family of Dwight O. Tanner created this Life Tributes page to make it easy to share your memories.

Send flowers to the Tanner family.