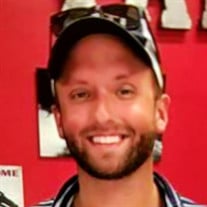 Dylan Walker Short, age 25, of Marion, IL, passed away at 3:58 a.m. on Sunday, December 31, 2017, at his home. He was born on Tuesday, September 15, 1992, in Paducah, KY the son of Samuel J. and Vicki L. (Carr) Short. Dylan attended school in Marion and was a graduate of Marion High School Class of 2011. He continued his education at John A. Logan College pursuing Engineering. His working career had been with Vogler Motors of Carbondale, IL but was currently working with his brother Dustin for the Aldridge Insurance Agency of Murphysboro, IL as an Insurance Producer. He was a member of First Baptist Church of Marion. Dylan was an artist and loved to draw and he also enjoyed following Saluki Basketball and attending the games. In his spare time he enjoyed working out, running, cooking, listening to Christian music, and playing video games. He loved his family and enjoyed the times they spent together. The many memories that have been created will now be cherished by those he leaves behind. He is survived by his mother and stepfather, Vicki and J. Mark Williams of Marion; father and stepmother, Samuel and Lisa Short of Marion; three brothers and one sister-in-law, Brandon Barthelme of Carterville, IL, Dustin Short (Erika) of Marion and Travis and Carol Short of Marion; niece, Clara Barthelme; three nephews, Max Barthelme, Harrison Short and Benjamin Short; two uncles, Van Carr and his wife Terri and Richard Short and his wife Jamie all of Marion; two aunts, Susan Short and Lynn Ann Dutton both of Marion, other extended family and many friends. He was preceded in death by his maternal great grandmother, Clara Abbott and maternal great grandfather, Loren Abbott; maternal grandmother, Marjorie Faulkner and maternal grandfather, James Faulkner and aunt, Valerie Covey. Arrangements were entrusted to Wilson-McReynolds Funeral Home, 900 N. Court St., Marion. The visitation was from 5:00 p.m. until 7:00 p.m. on Thursday, January 4, 2018, at the funeral home. During the time of visitation a “Reflection of Life” DVD Memorial Tribute featuring special people, places and events of Dylan’s life was presented to the family and friends. Following the time of visitation the funeral service was at 7:00 p.m. with Dr. Bob Dickerson presiding. During the service Dr. Bob Dickerson read comments of memory from Lisa Short and a special letter that Dylan had written to him. The prelude and postlude musical selections were recorded piano selections. Special recorded musical selections presented during the service were “Amazing Grace (My Chains Are Gone” by Chris Tomlin, “You Raise Me Up” by Selah, and “Good, Good Father” by Chris Tomlin. For those who preferred, memorial contributions were made to “Marion Medical Mission” and mailed in care of Wilson-McReynolds Funeral Home, 900 N. Court Street, Marion, IL 62959. Memorial envelopes were available at the funeral home. For additional information call the funeral home at 618-993-2131.

The family of Dylan Walker Short created this Life Tributes page to make it easy to share your memories.

Send flowers to the Short family.