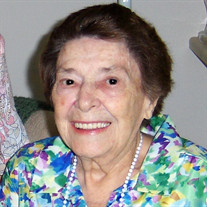 E. Pauline Frick, age 98, of Marion, IL passed away peacefully at 8:08 p.m. (eastern time) on Thursday, April 5, 2018 at the Brownsburg Health Care Center of Brownsburg, IN. She was born on Friday, July 18, 1919 in Marion, IL the daughter of Orla and Maud (Burlison) Manier. She was first united in marriage to Kenneth White on January 28, 1940. Following his death in 1968 she married Albert D. Frick on Friday, January 16, 1970, and together they shared over 39 years of marriage until his death on June 24, 2009. Pauline had several different jobs throughout her life. She worked at Schank’s Grocery in Morton, IL before moving back to Marion in 1968 where she worked at the Bank of Egypt. She was later a noon-time supervisor for Washington School and a co-owner of Quick Clean Center Laundromat. Pauline was a member of the Warder Street Baptist Church and served as a supervisor of Sunday School, Board of Christian Education, Financial Secretary and Deaconess. She also was a former member of the Eastern Star having served as Worthy Matron. Pauline and Albert also worked with DeMolay. She served as an election judge for over 20 years, mostly at the court house poling site. Pauline enjoyed crafting and crochet, knitting and some quilting. She liked word search puzzles. She is survived by her step-son and daughter-in-law, Roger and Susan Frick of Indianapolis, IN; two step-grandchildren, Ryan Frick of Indianapolis, IN and Shona Koehn and husband, Dallas, of Broken Arrow, OK, sister-in-law, Pearl McMillan of Morton, IL, several cousins, and friends. Arrangements for Pauline Frick have been entrusted to Wilson-McReynolds Funeral Home, 900 N. Court St., Marion. The visitation will be held Tuesday, April 10, 2018 from 11:00 a.m. until 1:00 p.m. at the funeral home Following the time of visitation the funeral service will be held at 1:00 p.m. with Pastor Lance Leeds presiding. Interment will follow in Odd Fellows Cemetery of Marion. In lieu of flowers memorial contributions may be made to the “American Cancer Society” and mailed in care of Wilson-McReynolds Funeral Home, 900 N. Court Street, Marion, IL 62959. Memorial envelopes will be available at the funeral home. For additional information call the funeral home at 618-993-2131.

E. Pauline Frick, age 98, of Marion, IL passed away peacefully at 8:08 p.m. (eastern time) on Thursday, April 5, 2018 at the Brownsburg Health Care Center of Brownsburg, IN. She was born on Friday, July 18, 1919 in Marion, IL the daughter of... View Obituary & Service Information

The family of E. Pauline Frick created this Life Tributes page to make it easy to share your memories.

Send flowers to the Frick family.