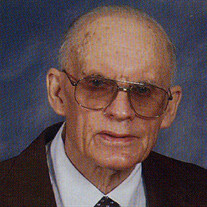 J.R. Morgan, age 85, of Marion, IL, passed away peacefully at 3:30 a.m. on Wednesday, June 10, 2015, in Parkway Manor of Marion. He was born in Anna, IL on Tuesday, September 17, 1929, the son of Eardle Andrew and Margaret Elsie (Bloodworth) Morgan. J.R. answered the call of this nation by serving in the United States Army during the time of the Korean War being stationed overseas. After his period of faithful service he was honorably discharged with the rank of corporal. He began his working career working for the Kroger Company in Marion, IL as a stock boy. After he returned home from the service he began working at Kroger’s again and also attending Southern Illinois University to further his education. After several years he received his Bachelors Degree in Education. Shortly after he received his degree, he began his long career in teaching at Louisville High School in Louisville, IL where he taught courses in business. He remained there for several years until he transferred to the Harrisburg High School in Harrisburg, IL where he also taught business classes; typing, bookkeeping and accounting until his retirement in the mid to late 1980’s. He was a long time member of the Second Baptist Church of Marion, IL and also a member of the Retired Teachers Association. In his spare time he enjoyed spending time in the afternoon visiting with his many friends at McDonalds drinking coffee. He also was an avid St. Louis Cardinal fan. Since he never married, his family was an important part of his life and enjoyed the time they spent together. The many memories that have been created will now be cherished by those left behind. He is survived his nephew, Baudilio Lugo of Tacoma, WA; two great nieces, Michelle Morris and her husband Owen of Tacoma, WA and Rebeka Girard and her husband Chris of Federal Way, WA; two great nephews, Daniel Lugo and his wife, Rachel of Florissant, MO and Ben Lugo and his wife Amy of Tacoma, WA; two cousins, Danny L. Bloodworth and his wife Sheila and Diane Jackson and her husband Carl all of Marion, IL, other extended family and many friends. He was preceded in death by his parents; sister, Beulah Bee Hughes; infant brother, Everett Morgan and niece, Valeria Ruth Lugo on April 6, 2014. Arrangements for J.R. Morgan were entrusted to Wilson-McReynolds Funeral Home, 900 N. Court St., Marion, IL. The time of the visitation was from 9:30 a.m. to 11:00 a.m. on Saturday, June 13, 2015, at the funeral home. Following the time of visitation the funeral service was at 11:00 a.m. with Dr. Bob Wagner presiding. The prelude and postlude musical selections were recorded piano selections. Special recorded vocal selections presented during the service were “How Great Thou Art” by Carrie Underwood and “Amazing Grace” by Elvis Presley. Interment followed in Odd Fellows Cemetery of Marion, IL. Pallbearers were Larry Williams, Steve Coale, Larry Clendenin, Pat Pulley, Bob English and Chuck Smith. Military honors were accorded at the graveside by members of Heyde-Pillow V.F.W. Post No. 1301, American Legion Post No. 147 both of Marion, IL and the Illinois Army National Guard Funeral Honors Burial Detail. Those participating were Commander, Larry Largent; Chaplain, Ron Ganzer; Bugler, Jim Grieme; Officer of the Day, Ernie Rinella; Color Guard, Jessie James and Bill Rice; National Colors, Jeff Hoffard; VFW Post Colors, Bob Casey; Firing Squad, Don Burgrabe, Gene Broombaugh, Ralph DeVasier, Bill Hampsey, Fred Read, Ron Russell and Jerry Swisher. Presentation of the flag to J.R.’s cousin, Diane Jackson was by SPC Vlad Noland. After the service the family and friends gathered at Second Baptist Church of Marion, for a meal and continued time fellowship and support. For those who preferred, memorial contributions were made to “Second Baptist Church Building Fund” and mailed in care of Wilson-McReynolds Funeral Home, P.O. Box 370, Marion, IL 62959. Memorial envelopes were available at the funeral home. For additional information please contact the funeral home by calling 618-993-2131.

The family of Eardle J.R. Morgan created this Life Tributes page to make it easy to share your memories.

Send flowers to the Morgan family.