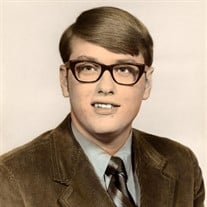 Earl Blankenship III, age 71, of Marion, IL, passed away peacefully, at 5:25 p.m. on Sunday, December 5, 2021, in Herrin Hospital of Herrin, IL. He was born on February 2, 1950, in Carbondale, IL, the son of Dolly Mae (Palmer) Blankenship and Earl Blankenship, Jr. Earl attended school in Marion and was a graduate of Marion High School Class of 1968. He continued with his education attending at Southern Illinois University of Carbondale, IL, where here received his Master’s Degree in Engineering. His working career was with the family business, E. Blankenship & Company that later became Federated Auto Parts until his retirement. He was a Christian and was of the Baptist faith. He had done extensive reading on many of the different books of the Bible. In his spare time, he enjoyed bowling, especially when he was younger, and once bowled a perfect 300 game. He also was an avid galactic enthusiast, especially Star Wars and Star Trek. He was known as being a quiet person and often to himself. He loved his family and enjoyed times they shared. The memories created will be cherished by those he leaves behind. He is survived by his mother, Dolly Mae Blankenship of Marion; sister and brother-in-law, Mona B. and Bruce Carter of Marion; brother, Neil Blankenship of Marion, a host of nieces and nephews, great nieces and great nephews, other extended family and many friends. He was preceded in death by his father and nephew, Nicholas Blankenship. Arrangements have been entrusted to Wilson-McReynolds Funeral Home, 900 North Court Street, Marion, IL. The visitation will be on Thursday, December 9, 2021, from 11:00 a.m. to 1:00 p.m. at the funeral home. Following the time of visitation, the funeral service will be at 1:00 p.m. with Rev. Kevin McNeely presiding. Interment will follow next to his father in the Rose Hill Cemetery of Marion, IL. The family requests for those who prefer, memorial contributions be given to either or both; “American Heart Association” and/or “American Cancer Society.” Memorial contributions may be mailed in care of Wilson-McReynolds Funeral Home, 900 N. Court Street, Marion, IL, 62959. Memorial envelopes will be available at the funeral home. For additional information call the funeral home at 618-993-2131. Due to the executive order by the Governor of Illinois, for all those attending the visitation and funeral service inside, the wearing of a face mask and practice of social distancing is suggested.

The family of Earl Blankenship III created this Life Tributes page to make it easy to share your memories.

Send flowers to the Blankenship family.