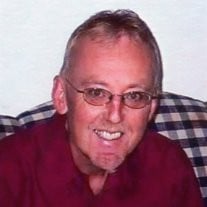 Eddie Lee Long, age 49, of rural Marion, IL passed away suddenly at 5:51 a.m., on Monday, February 18, 2013, in Heartland Regional Medical Center of Marion, IL. He was born on Sunday, February 2, 1964, in Marion, IL the son of Edward Lee and Fern (Dawson) Long. Eddie attended school in Crab Orchard, IL and was a graduate of Crab Orchard High School in 1982. He was united in marriage to Valerie Ellen Gilbert on Friday, May 16, 2003, in Memphis, TN and together they have shared nearly ten years of marriage. Eddie had previously worked for the Hostess Company as their route salesman for about 15 years. He currently was working at Southern Illinois University of Carbondale, IL at Lentz Hall in the kitchen, helping prepare and serve meals to the students. He was a Christian and of the Baptist faith. In his spare time he enjoyed cooking Cajun food, specifically crawfish and spending time with his family, especially his children, always wanting to cook them a special meal. He was always interested and involved in their many activities. Earlier in his life he did drag racing and still enjoyed attending drag races. Eddie was very good at working on cars or anything that had a motor. He loved to just sit back and listen to Blues Music and relax with all his family and many friends. Those now left behind will cherish the many memories that have been created. He is survived by his wife, Valerie E. Long of Marion, IL; daughter, Alyssa Ellen Long and son, Brandon Edward Long both of Marion, IL; mother, Fern Long of Marion, IL; mother-in-law, Pat Wilson and husband, Dale “Squeak” of Marion, IL; father-in-law, Larry Gilbert and wife, Dawn of Herrin, IL; brother-in-law, Andrew Wilson of Carbondale, IL, other extended family and many friends. He was preceded in death by his father, Edward Lee Long on July 12, 1991. Arrangements for Eddie Lee Long were entrusted to the Wilson-McReynolds Funeral Home, 900 N. Court Street, of Marion. The time of visitation for family and friends was on Wednesday, February 20th, from 5:00 p.m. until 8:00 p.m. at the funeral home. During the time of visitation a “Reflection of Life” DVD Memorial Tribute featuring special people, places and events of Eddie’s life was presented to the family and friends. The funeral service was at 11:00 a.m. on Thursday, February 21, 2013, at Wilson-McReynolds Funeral Home with Rev. Ivan Ryan presiding. The prelude and postlude musical selections were recorded vocal selections by Alan Jackson. Special recorded vocal musical selection presented during the service was “Wonderful Tonight” by Eric Clapton. During the service bagpiper Paul Thompson presented “Amazing Grace” on the bagpipes. He also piped “Going Home” leading the casket out of the funeral home getting ready to go to the cemetery. Interment followed in Egyptian Memorial Gardens Cemetery of Energy, IL. Pallbearers were Jason Hensgen, Stephen Hensgen, Jason Orendoff, Jim Hensgen, Andrew Wilson and Dale Wilson. After the service the family and friends gathered at the home of Pat and Dale Wilson for a meal and continued time of fellowship and support. For those who preferred, memorial contributions were made to “Valerie E. Long” to be placed into an educational fund to be used for Eddie’s children in the future. Memorial contribution envelopes were available at the funeral home or were mailed in care of Wilson-McReynolds Funeral Home, P.O. Box 370, Marion, IL 62959. For additional information please contact the funeral home by calling 618-993-2131.

The family of Eddie Lee Long created this Life Tributes page to make it easy to share your memories.

Send flowers to the Long family.