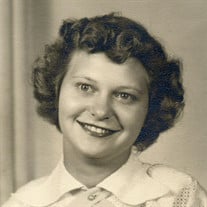 Edna J. Brown, age 85, of Herrin, IL passed away at 7:35 a.m. on Sunday, January 18, 2015, in Shawnee Christian Nursing Care Center of Herrin, IL. She was born on Wednesday, December 11, 1929, in Bridgeport, CT the daughter of Ralph Rudolph and Jennie (Sivec) Choun. She attended school in Bridgeport. Edna met her husband, Walton W. “Bill” Brown while he was stationed at New London, CT serving in the United States Navy during WW II. They were united in marriage on Saturday, February 8, 1947, in Bridgeport, CT and together they shared over fifty years of marriage until his death on September 19, 1997. Shortly after their marriage, they moved to Cape Girardeau, MO and lived there until 1960. Then in 1960, the family moved to Herrin, IL and Edna and her husband became owners and operators of The Herrin Pastry Shop and continued the business until 1979. Edna devoted her life to managing her home and seeing to the needs of her husband and six children. She and her husband raised and educated all of their children in the Catholic Church and Catholic School. She was a member of Our Lady of Mount Carmel Catholic Church of Herrin, IL. In her spare time she enjoyed spending time in her flower garden and watching the birds. She also enjoyed sewing, baking and cooking; listening to music, especially of the 1940’s era, watching trivia game shows, reading poetry, listening to talk radio and spending time with her animals, especially her cats. Edna also enjoyed and appreciated the many visits from Sister Marciana in her home and during her stay at Shawnee Christian Nursing Care Center. She is survived her five sons and two daughters-in-law, Walton and Sharon Brown of Gallipolis, OH, David G. and Becky Brown of Bicknell, IN, Gregory K. Brown of Makanda, IL, Christopher Brown and companion, Valerie Powell of Johnston City, IL and Bruce Brown and companion, Teresa Coleman of Marion, IL; daughter and son-in-law, Kathy and Travis Thomas of Delaware, OK; four grandchildren, Amy O’Hagan and husband, Kirk of Savannah, GA, Misty Lattuada and husband, Randy of Herrin, IL, Danielle Wilkie of Herrin, IL and Jennifer Brown of Herrin, IL; three step grandchildren, Jason Cravens and Cody Coleman both of Marion, IL and Lindsey Coleman of Hurst, IL and eight great grandchildren, other extended family and many friends. She was preceded in death by her parents, husband, infant daughter; granddaughter, Jamie Sanborn and sister, Ruth Laviolette. Arrangements for Edna J. Brown were entrusted to Wilson-McReynolds Funeral Home, 900 N. Court St., Marion, IL. The time of visitation was on Wednesday, January 21, 2015, between the hours of 9:00 a.m. and 11:00 a.m. at the funeral home. Following the time of visitation the funeral service was at 11:00 a.m. with Monsignor Ken Schaefer of Our Lady of Mt. Carmel Church of Herrin, IL officiating. The prelude and postlude musical selections were recorded piano selections. Special recorded vocal musical selections presented during the service were “Ava Maria” Perry Como and “In the Garden” by Patti Page. Interment followed next to her husband in St. Mary’s Catholic Cemetery of Cape Girardeau, MO at 2:00 p.m. with Father Allan Saunders presiding. Those attending the graveside committal service gathered at the cemetery prior to 2:00 p.m. Pallbearers were Walton Brown, Bruce Brown, Christopher Brown, Randy Lattuada, Mike Spinks, Travis Thomas and Gregory K. Brown. For those who preferred, memorial contributions were made to either “Our Lady of Mount Carmel School Building Fund” or “United Cerebral Palsy” and mailed in care of Wilson-McReynolds Funeral Home, P.O. Box 370, Marion, IL 62959. Memorial envelopes were available at the funeral home. For additional information please contact the funeral home by calling 618-993-2131.

The family of Edna June Brown created this Life Tributes page to make it easy to share your memories.