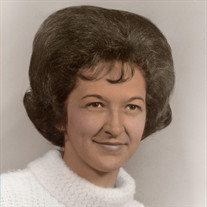 Elizabeth J. “Betty” Deaton, age 83, of Marion, IL, passed away peacefully at 3:37 p.m. on Saturday, August 17, 2019, at her home. She was born at home located on North Anna Street in West Frankfort, IL, on Thursday, September 19, 1935, the daughter of Basil Eugene and Mary (Scott) Nelson. Early in Betty’s working career she worked on the Mercury Space Program in the Ordill Area located on the refuge west of Marion. Later she worked in secretarial positions for several of the areas law firms. Her main working career was with the Marion Unit II School System as a book keeper, also doing payroll and managing banking issues for the school system for 25 years until her retirement. After her retirement from the school system she was a merchandiser being responsible managing inventory in many of the areas businesses for American Greetings Cards for several years. Also during her lifetime she became a Licensed Real Estate Agent and worked for Les Stilley Realty of Marion, for many years. She was baptized and was an active member of the First Baptist Church of Marion her entire life. She served and was actively involved in many activities of the church including; church trustee, finance committee, Suzanne Stucky Mission Circle, Dorcas Sunday School Class, The Joy Singers, Counting Committee, nursery worker for 50 years, Superintendent of the Children’s Department, Director of the Toddlers Class and teacher of kindergarten. Several years ago she was an active member of the Daughters of Rebekah of Marion. She also was a member of the Marion Woman’s Club having served as President and wrote for the Marion Daily about the activities of the club and also volunteered and served at the Marion Soup Kitchen. She loved her family and was always interested in all of their many activities; especially those of her grandchildren, niece and great nieces. The many memories that have been created will now be cherished by those she leaves behind. She is survived by her son and daughter-in-law, Curtis S. and Tina Deaton of Marion; daughter and son-in-law, Delaina and John Katubig of St. Charles, MO; grandchildren, Barbara Hawley and Angela Silvers both of Westminster, SC, Alyse Martinez and husband, Rene of East Chicago, IL, Ryan Thews of Portage, IN, Kloe Katubig of Kansas City, MO, Alex Olivia Katubig of Columbia, MO and Kane Katubig of St. Louis, MO; sister-in-law, Diane Pritchett of Marion, IL; nephew, Darin Sigler of Bradenton, FL; niece, Robin Meyer and husband, Jerry of Waynesville, MO; two great nieces, Jerin Meyer of Waynesville, MO and Kristen Meyer of Atlanta, GA, other extended family and many friends. She was preceded in death by her parents and brother, Scott Nelson. Arrangements were entrusted to Wilson-McReynolds Funeral Home, 900 N. Court St., Marion. The visitation was from 11:00 a.m. until 1:00 p.m. on Saturday, August 24, 2019, at the funeral home. Following the time of visitation the funeral service was at 1:00 p.m. with Dr. Bob Dickerson presiding. The prelude musical selections were recorded piano selections. Special vocal musical selections presented during the service were “Goodbye World, Goodbye” and “Promised Land Medley” both by the Joy Singers Gospel Group of the First Baptist Church with recorded accompaniment. Also presented was the vocal musical selection “Amazing Grace” as a congregational hymn with pianist, Byron Corzine accompanying. The postlude musical selections were presented by pianist, Byron Corzine. Interment followed near her parents and brother in Odd Fellows Cemetery of Marion. Pallbearers were Jeff McCormick, John Katubig, Renee Martinez, Pat Evans, D.J. Boggs and Dylan Davis. Following the committal service the family and friends gathered at Betty’s home for a meal and continued time of Fellowship and support. For those who preferred, memorial contributions were made to either or both; “The Lighthouse Shelter” and/or “Marion Woman’s Club” and mailed in care of Wilson-McReynolds Funeral Home, 900 N. Court Street, Marion, IL 62959. Memorial envelopes were available at the funeral home. For additional information call the funeral home at 618-993-2131.

The family of Elizabeth Jeanne "Betty" Deaton created this Life Tributes page to make it easy to share your memories.

Send flowers to the Deaton family.