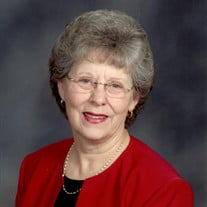 Elizabeth Ann (Lingle) Hartkopf, age 84, of Marion, IL entered the presence of the Lord at 9:00p.m. on Tuesday, December 8, 2020, with family by her side at her home. Elizabeth was known for being devoted to her family and being a servant of God. She was born on Wednesday, August 5, 1936 at home in Marion, the daughter of Ammon Eli and Mabel Ann (Peterson) Webb. Elizabeth grew up in Marion, where she spent most of her life, and was a graduate of Marion High School, the class of 1954. After graduating from High School she attended Christian Welfare Hospital Nursing School until she was united in marriage on May 14, 1955 to Theodore Lingle and shared over 24 years of marriage before his death in 1979. She then married John E. Hartkopf on November 1, 1981 and spent over thirty-nine years until his death in January of 2020. She was a 1960 graduate of Southern Illinois University, Division of Technical and Adult Education (Cosmetology) and spent over 30 years running her own hair salon called Liz's Beauty Shop. In her spare time, she loved reading and knitting. Her family was amazed at how many books she had read, she was constantly reading and she loved to work in her garden. She attended Heartland Christian Church of Marion, where she faithfully attended for over 45 years. The many memories shared with her family and friends will be cherished by those who knew and loved her. She is survived by two daughters, Frances Cave and husband Jerry of Marion, and Sandra Shibles and husband Bruce of Denver, Colorado; two sons, David Lingle and wife Regina of Lexington, IL and Jonathan Lingle and wife Billie of Murfreesboro, TN; three grandchildren whom she lovingly raised as her own children, Ron Lang and wife Tracy of Marion, Cayenne Haseker and husband Mike of Marion, and Kara Moreland and husband Alton of St. Charles, MO, and several other grandchildren and great-grandchildren; sister-in-law Mary Jean Overby of Marion, sister-in-law Sue Webb of Marion, and several other family members. She was preceded in death by her parents Ammon and Mabel Webb of Marion, brother Larry Webb of Marion, husband Theodore Lingle of Marion, husband John Hartkopf of Marion, brother in law, Max Overby of Marion and grandson Trevor Lingle of Lexington, IL. Arrangements were entrusted to Wilson-McReynolds Funeral Home in Marion. A family graveside ceremony was held at the Rose Hill Cemetery due to the current health related issues. A Celebration of Life will be held later in the summer of 2021. In lieu of flowers, memorial contributions should be made to Residential Health and Hospice.

Elizabeth Ann (Lingle) Hartkopf, age 84, of Marion, IL entered the presence of the Lord at 9:00p.m. on Tuesday, December 8, 2020, with family by her side at her home. Elizabeth was known for being devoted to her family and being a servant of... View Obituary & Service Information

The family of Elizabeth Ann Hartkopf created this Life Tributes page to make it easy to share your memories.

Send flowers to the Hartkopf family.