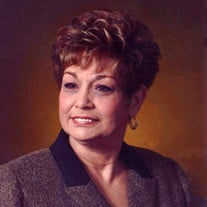 Elizabeth J. “Liz” Strobel, age 67, of Marion, IL, passed away peacefully with her family by her side at 4:15 p.m. on Tuesday, August 4, 2015, at her home. She was born on Friday, March 26, 1948, in Enfield, IL of White County, the daughter of Raymond Lee and Veda Alice (Justice) Hosick. She was adopted in 1951 by Emer and Jewell (Anderson) Allen. Elizabeth attended school in Marion and was a graduate of Marion High School Class of 1966. She was united in marriage to Kenneth Wayne “Kenny” Strobel on Saturday, June 18, 1966, in the First Christian Church of Marion, IL and together they shared forty-seven years of marriage until his death on July 6, 2013. Elizabeth had worked for several businesses throughout her working career but serving as the City Clerk of Marion, IL for 14 years was one of her favorite positions until her health forced her retirement. She attended the Marion Third Baptist Church for many years. For over 30 years, she served as a member and officer of the Williamson County Republican Central Committee and the Williamson County Republican Women’s Organization. She also was a member of the Marion V.F.W. Heyde-Pillow Post No. 1301 Ladies Auxiliary. Two of her greatest enjoyments were teaching piano and keyboard and playing for many weddings and social events. In her spare time she enjoyed league bowling and shopping. Elizabeth will be remembered as being a people person, always having a smile and enjoying the company of her family and many friends. She is survived by her two sons and daughter-in-law, John Wayne Strobel and Matthew Allen and Cynthia Strobel all of Marion, IL; grandson, Tyler Strobel and two granddaughters, Ashlyn and Taylor Strobel all of Marion, IL, sister, Mary J. Hosick-Gibbs of Waterloo, IL; brother, Terry Hosick Hayse of Benton, IL; nieces, Vicki Lueke of Dahlgren, IL and Tonyja Cruse of McLeansboro, IL; nephew, Rick Mercer of Peoria, IL, a host of other nieces and nephews, other extended family; her two companion Yorkies, Napoleon and Molly and many friends. She was preceded in death by her parents, husband and nine brothers and sisters. Arrangements for Elizabeth J. “Liz” Strobel were entrusted to the Wilson-McReynolds Funeral Home, 900 N. Court Street, of Marion, IL. The time of the visitation for family and friends was from 4:00 p.m. to 8:00 p.m. on Friday, August 7th at the funeral home. During the time of visitation a “Reflection of Life” DVD Memorial Tribute featuring special people, places and events of Elizabeth’s life was presented to the family and friends. The funeral service was at 1:00 p.m. on Saturday, August 8, 2015, with Rev. Scott Kallem presiding. The prelude and postlude musical selections were recorded piano selections. Special recorded musical selections presented during the service were “Swing Low Sweet Chariot”, “How Great Thou Art”, “Peace In the Valley” and "Amazing Grace” all by Elvis Presley and “I’ll Fly Away” by the Statler Brothers. Interment followed next to her husband in Rose Hill Cemetery of Marion, IL. Pallbearers were Matthew Strobel, Hobbie Boyles, Tyler Strobel, Blake Lueke, Hobb Boyles and Bill Lueke. Serving as honorary pallbearer was Jim Gulledge. Following the committal service at the cemetery the family and friends gathered at Third Baptist Church in Marion for a meal and continued time of fellowship and support. For those who preferred, memorial contributions were made to “Third Baptist Church” and mailed in care of Wilson-McReynolds Funeral Home, P.O. Box 370, Marion, IL 62959. Memorial envelopes were available at the funeral home. For additional information please contact the funeral home by calling 618-993-2131.

The family of Elizabeth J. "Liz" Strobel created this Life Tributes page to make it easy to share your memories.

Send flowers to the Strobel family.