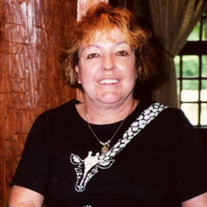 Elizabeth Ann Nall, age 74, of West Frankfort, IL, passed away at 9:06 a.m. on Thursday, December 10, 2020, in Herrin Hospital of Herrin, IL. She was born on Sunday, February 24, 1946, at home in Lutesville, MO, the daughter of Emmett “Pete” Ethridge and Martha “Bessie” Elizabeth (McHaney) Nall. After graduation from high school she went on and attended business college in Cape Girardeau, MO. She was united in marriage to Larry Joe Crain, on Saturday, March 16, 1968, in Cambria, IL. He preceded her in death on Saturday, August 13, 2011. Her working career for many years was with Centerstone of West Frankfort, in Human Resources and the Records Department until her retirement at age 65. She was a member of St. John’s Catholic Church of West Frankfort and also was very involved with the Daughters of Isabella- 959 Monsignor de Gasperi Circle of Herrin, IL. In her spare time she enjoyed helping the Knights of Columbus with their bingo fundraising, gardening, working in her yard, attending live music concerts and traveling, especially to Florida every year for many years. She loved her family and the many times they all would be together. She was always interested in hearing about all of the activities in their lives. The many memories created will now be cherished by those she leaves behind. She is survived by her brother and sister-in-law, Tom and Debbie Nall of Cape Girardeau, MO; two sisters-in-law, Mary Nall of Marion, IL and Alverda Nall of Lake of the Ozarks, MO, several nieces and nephews, other extended family and many friends. She was preceded in death by her parents, husband; two sisters, Grace Ladd and her husband, Jim and her baby sister, Clara Ruth Nall and two brothers, Jim and John Nall. Arrangements have been entrusted to Wilson-McReynolds Funeral Home, 900 N. Court St., Marion. Due to the current health concerns, the funeral service will be a private family gathering, at Wilson-McReynolds Funeral Home with Father Brian Barker presiding. Interment will follow next to her husband in Maplewood Cemetery of Marion, IL. For those who prefer, memorial contributions may be made to “The Daughter’s of Isabella” in memory of Elizabeth Ann. Memorial contributions may be mailed in care of Wilson-McReynolds Funeral Home, 900 N. Court Street, Marion, IL 62959. Memorial contribution envelopes will also be available at the funeral home. For additional information call the funeral home at 618-993-2131.

The family of Elizabeth Ann Nall created this Life Tributes page to make it easy to share your memories.

Send flowers to the Nall family.