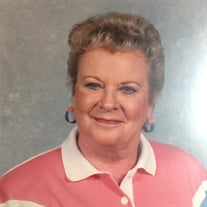 Elizabeth J. Thompson, age 78, of rural Marion, IL, near New Dennison, passed away peacefully at 9:58 a.m. on Saturday, August 20, 2016, at her home. She was born on Monday, November 8, 1937, in rural Williamson County, IL, the daughter of Gus Herbert “Dick” and Myrtle Iva (Vaughn) Rush. Elizabeth attended school in Crab Orchard, IL and was a graduate of Crab Orchard High School Class of 1955. She was a member of First Presbyterian Church of Marion for many years. Her working career was as a coal miner in the area coal mines for 20 years. She first worked for Freeman No. 6 Coal Mine near Sesser, IL and later for Inland Steel Coal Mine near McLeansboro, IL. She last worked for the Consolidated Coal Company near Sesser as a mine boss until she retired. Later she started working for the Lowe’s Lumber Company, first in Marion and later in Carbondale, IL, for a total of 18 years until her retirement. In her spare time she enjoyed camping and fishing at Little Grassy Lake with her family and friends. She also enjoyed traveling and had travel to most areas of the country. Her family was a very important part of her life and the many memories that have been created will now be cherished by those she leaves behind. She is survived by her daughter and son-in-law, Jodie and Monty Sullivan of rural Creal Springs, IL; two grandsons, Stephen Sullivan who is currently serving in the military and stationed in Germany along with his wife Lauren and Tucker Sullivan of Creal Springs; granddaughter, Miranda Hewlett of Marion; two brothers, Berchard Rush and Ted Rush both of Marion, other extended family members and many friends. She was preceded in death by her parents, son, Michael Hewlett who passed away on March 6, 2014; sister, Myrtle Tanner and six brothers, James, Tom, Bill, Bob, Sam and Max Rush. Arrangements for Elizabeth J. Thompson have been entrusted to Wilson-McReynolds Funeral Home, 900 N. Court St., Marion, IL. A Celebration of Life service will be held by the family later in the fall. For additional information please contact the funeral home by calling 618-993-2131.

The family of Elizabeth Jane Thompson created this Life Tributes page to make it easy to share your memories.

Send flowers to the Thompson family.