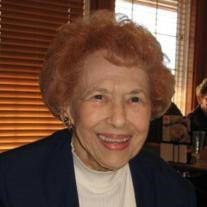 Elizabeth Jane “Betty” (Gore) Stein, age 94, of Marion, IL passed away peacefully at 7:05 a.m., on Saturday, December 29, 2012, in the Shawnee Christian Care Center of Herrin, IL. She was born on Friday, October 25, 1918, in Marion, IL the daughter of Elmer Nathanial and Emiline (Elliott) Gore. Elizabeth accepted the Lord as her Savior during a morning service in November of 1925, at a revival headed by Dr. A.E. Prince, but her parents thought she was too young and didn’t allow her to go forward that morning. However, the Pastor’s assistant came to the house that same day and talked with her, and that night she not only came forward at the evening service but was baptized that same night. On April 11, 1926, at the age of seven, she became the youngest member of First Baptist Church in Marion. She was very active in the church, teaching Sunday school while in high school and was a member of the church choir at a very young age. To help develop her musical skills she took individual vocal instructions under the direction of Grace Duty for five years. During this time the Gore sisters, Lillian, Pauline, Thelma and Elizabeth, who was still in elementary school, formed a quartet singing group called The Gore Sisters’ Quartet. The group sang at churches, funerals, weddings and also sang at the Southern Baptist Convention at Harrisburg, IL. During this time the First Baptist Church of Marion was expected to furnish music and a minister for the Baptist radio station at Harrisburg (WEBQ). Every so often and the Gore Sisters’ Quartet frequently supplied the music. Elizabeth recalled having to get up early in the morning to be at the radio station and then having to rush back to attend classes. At some point, the radio station made a master record of them in the old sanctuary at First Baptist Church to be used when the sisters couldn’t be there in person. Elizabeth attended school in Marion, skipping the third grade because of her scholastic ability and was a recipient of the Marion Rotary Award during high school. She was a graduate of Marion High School in 1935. After high school she went on to attend Lockyear’s Business College of Evansville, IN and graduated at the head of her class in less than seven months rather than the usual one year program. She then began working at Igleheart Brothers in Evansville, IN for several years. Then prior to the beginning of WW II, she returned to Marion and began working for the district controller of CIPS. Elizabeth was united in marriage to John Wesley Stein on Wednesday, August 30, 1944, in Marion, IL and together they shared nearly twenty-seven years of marriage until his death on Friday, August 13, 1971. After WW II, Elizabeth and her husband, John moved to Minneapolis, MN living and working there until they relocated to Racine, WI in 1951. While living in Wisconsin, Elizabeth worked as an executive secretary at Walker Manufacturing Company in Racine, WI for twenty-two years. Before her retirement in 1984, she had been the secretary to two different company presidents. While living in Racine, WI, Elizabeth moved her church membership from First Baptist Church in Marion, IL to Calvary Memorial Church from 1955 to 1985. At Calvary Memorial Church, she taught Sunday school and Vacation Bible School. She also was invited to be a member of the choir and was a featured soloist. After returning to Marion, IL in 1984, she rejoined First Baptist Church in January of 1985 and became a charter member of the Joy Singers and has remained a member of First Baptist Church until her death. Elizabeth was always involved in the communities she lived in and was an active member of Beta Sigma Phi Sorority in both Evansville, IN and in Marion, IL. She was a former active member of the CLIO Club of Marion, IL (founded in 1903) and was made an Honorary Member until the time of her death. She also was a member of the Marion Memorial Hospital Auxiliary serving as a hostess at the hospital desk and headed the committee that edited, printed, and distributed the monthly newsletter. Though she always led a very active life, family was very important to her. She always took interest in their many different activities and enjoyed the times they all would gather together. The memories that were created will now be cherished by those she leaves behind. She is survived by her daughter and son-in-law, Susan and George Herbert of Richmond, VA; three grandchildren; Karla Beth Koster and her husband, Brian of Charleston, SC; GT Herbert and his wife, Glenda Cooper of Kirkland, WA; and Sara Herbert of Henrico, VA; five great-grandchildren Kirsten Ruopoli, Gabrielle Ruopoli, Emma Koster, Merrin Wilson, and Katara Wilson; cousin, Eugene Parker of Marion, IL, other extended family and many friends. She was preceded in death by her parents and husband; three sisters, Lillian Collier, Pauline Nitterauer Brosi, Thelma Gore, and brother, Paul Gore. Arrangements for Elizabeth Jane “Betty” (Gore) Stein were entrusted to the Wilson-McReynolds Funeral Home, 900 N. Court Street, of Marion, IL. The time of visitation for family and friends was on Thursday, January 3, 2013, from 9:30 a.m. until 11:00 a.m. at the funeral home. Following the time of visitation the funeral service was at 11:00 a.m. with Dr. Bob Dickerson presiding. The prelude and postlude musical selections were presented by pianist, Julie Douglas. Special musical selections presented during the service were “Amazing Grace” and “He Touched Me” both by vocalist, Elaine Hancock with pianist, Julie Douglas accompanying. Interment followed next to her husband in Rose Hill Cemetery in Marion, IL. For those who preferred, memorial contributions were made to “First Baptist Church”. Memorial contribution envelopes were available at the funeral home or were mailed in care of Wilson-McReynolds Funeral Home, P.O. Box 370, Marion, IL 62959. For additional information please contact the funeral home by calling 618-993-2131.

The family of Elizabeth Jane "Betty" Gore Stein created this Life Tributes page to make it easy to share your memories.