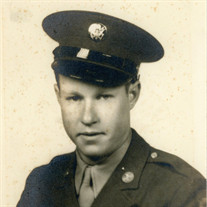 Elmer F. Rodgers, age 96, of Marion, IL, passed away at 10:51 p.m. on Monday, December 31, 2018, in Herrin Hospital in Herrin, IL. He was born on Tuesday, May 9, 1922, in Marion, IL, the son of Ezra and Edith J. (Fuller) Rodgers. Elmer grew up northwest of Marion on the family farm and graduated from the Lamaster School near his home and was of the Protestant faith. He answered the call of this nation and served in the United States Army during the time of WW II and faithfully served until he was honorably discharged November 3, 1945. He was united in marriage to Shirley Jean Kelley on Thursday, February 7, 1946 in Johnston City, IL and together they shared over 51 years of marriage until her death Sunday, June 22, 1997. Elmer was a coal miner for Freeman Coal Company and retired at age 65 when the mines closed and for a while operated a trucking business. He was a former member of the American Legion Post No. 147 and the V.F.W. Heyde-Pillow Post No. 1301 both of Marion and was a member of the United Mine Workers of America. Elmer always enjoyed the company of his family and his friends and for many years enjoyed drinking coffee and telling stories with his friends at Pulley’s Barbecue. In earlier years he enjoyed hunting and fishing and in recent years enjoyed gardening and sitting on his front porch feeding and watching birds and wildlife in his yard. He loved his family and friends and the many memories created will now be cherished by those who knew and loved him. He is survived by his daughter, Dorothea M. “Dori” Hester of Tampa, FL; two granddaughters, Pamela Crain-Stagner of West Frankfort, IL and Michelle Marowski and husband David of Tallahassee, FL; grandson, James Stevens and husband Steven of Las Vegas, NV; six great grandchildren, Regan Price and husband Wesley, Zach Franckhauser, Dylan Stagner, Ryan Marowski, Meagan Marowski and Nicole Marowski; sister, Mary Bloodworth of Marion; brother, Edgar Rodgers of Marion other extended family and many friends. The family extends a very special appreciation to nephew, Danny Rodgers and niece, Brenda Hess for their wonderful care and assistance over the years. He was preceded in death by his parents; wife, Shirley Rodgers; daughter, Melva Jean Crain; son, Virgil Lee Rodgers; two sisters, Ada June Lucker and Nina Baldwin and brother, Phillip Rodgers. Arrangements for Elmer F. Rodgers were entrusted to Wilson-McReynolds Funeral Home, 900 N. Court St., Marion. The visitation was from 10:00 a.m. until 11:00 a.m. on Saturday, January 5, 2019, at the funeral home. During the time of visitation a “Reflection of Life” DVD Memorial Tribute featuring special people, places and events in Elmer’s life was presented to the family and friends. Following the time of visitation funeral service was at 11:00 a.m. with the eulogy presented by his grandson-in-law, David Marowski and great grandson, Zach Franckhauser. Also his great granddaughter, Regan Price and granddaughter, Michelle Marowski presented comments of memory. The prelude and postlude musical selections were recorded piano selections. Special recorded vocal musical selections presented during the service were “Used to You” by Luke Combs, “Amazing Grace” by The Royal Scots Dragoon Guard and “Go Rest High On That Mountain” by Vince Gill. Interment followed in Odd Fellows Cemetery in Marion, with Elmer’s great granddaughter, Regan Price presenting comments and prayer. Pallbearers were David Marowski, Danny Rodgers, Zach Franckhauser, Wesley Price, Jim Stevens and Chadwick Ganz. Military honors were accorded at the cemetery by members of Heyde-Pillow V.F.W. Post No. 1301 and American Legion Post No. 147 both of Marion. Those participating were Commander, Dan Fruge; Chaplin, Ray Hancock; Officer of the Day, Ron Phillips; Bugler Bill Rice Sr.; American Flag, David Easley; V.F.W. Post Flag, Greg Turrunt; Color Guard, John Andrew and Herbert Robinson and Firing Squad, Bob Wallace, Chris Payne, Merlin Koester, Bill Hatfield, Bill Hampsey, Gene Broombaugh and Art Ambos. The folded flag was presented to Elmer’s daughter, Dori. Following the committal service at the cemetery the family and friends gathered at KB Barbeque in Marion for a meal and continued time of fellowship and support. For additional information please call the funeral home at 618-993-2131.

The family of Elmer Franklin Rodgers created this Life Tributes page to make it easy to share your memories.

Send flowers to the Rodgers family.