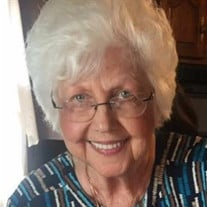 Emma Jean McDonald, age 84, of Marion, IL, passed away at 1:02 p.m. on Sunday, January 6, 2019, in Heartland Regional Medical Center of Marion, IL. She was born on Saturday, February 17, 1934 at the 20-acre homeplace in Creal Springs, IL. Emma Jean is the daughter of Howard Lee and Carrie Mae (Beasley) Parks. She was loved dearly and loved in return her three older siblings Wilma, Lindell, and Carroll. At the age of 13, Emma gave her heart to Jesus while at a revival at Arnold View Free Will Baptist Church. She continued in her steadfast faith throughout her life and was an influence for many others in coming to faith in Christ. Emma Jean attended school at Crab Orchard, IL and was a graduate of Crab Orchard High School Class of 1952. She was united in marriage to William Eugene “Bill” McDonald on Saturday, July 5, 1952, in Arnold View Free Will Baptist Church, located south of Crab Orchard, and together they shared nearly 59 years of marriage until his death on Friday, March 4, 2011. To this union was born two children, William “Terry” McDonald in 1954 and Sherri (McDonald) Milburn in 1956. Emma Jean was a homemaker the majority of her lifetime managing her home and seeing to the needs of her family. She actively served alongside her husband while he pastored at local churches including: Rock Springs Freewill Baptist Church in Thebes, Pittsburg Freewill Baptist Church in Pittsburg, Union Freewill Baptist Church near Thompsonville, and Liberty No. 6 Freewill Baptist Church near Johnston City. She was a woman who loved God and a prayer warrior. She lived out the words that she professed. She was a member of Union Freewill Baptist Church near Thompsonville. In her spare time she enjoyed fishing, camping, organizing parties, hosting events, and entertaining. She loved cooking and was known for her pies. Emma Jean enjoyed singing and was known for her beautiful alto voice often singing in church services. Her family was the most important part of her life and she was always interested in all of their many activities and enjoyed the times they all would be together. The many memories that have been created will now be cherished by those she leaves behind. She was preceded in death by her parents, husband; son, William Terry McDonald in 1981; sister and brother-in-law, Wilma and Leonard Lay and brother, Lindell Parks. She is survived by her daughter and son-in-law, Sherri and David Milburn of Marion; two grandchildren, Kari Milburn White and her husband Drew of Clarksville, TN and Terry Milburn and his wife Lyndsay of Creal Springs; four great grandchildren, Emmalyn White, Blake Milburn, Wyatt Milburn and Sula White; brother and sister-in-law, Carroll and Pauline Parks of Gary, IN; daughter-in-law, Marba Nell Bertling of Goreville, IL; sister-in-law, Marcheeta Parks of Marion; friend and caregiver, Debby Johnson of Olive Branch, IL, a host of nieces, nephews, cousins, other extended family, and many friends. And now, believers in Christ, we can have the peace that she has heard the words, “Well done good and faithful servant!” (Matthew 25:23). It is our hope that everyone hears the same words when called to leave this world by accepting this promise: For God so loved the world, that he gave his only begotten Son, that whosoever believeth in him should not perish, but have everlasting life. John 3:16 Arrangements for Emma Jean McDonald were entrusted to Wilson-McReynolds Funeral Home, 900 N. Court St., Marion. The visitation was from 4:00 p.m. until 8:00 p.m. on Thursday, January 10th, at the funeral home. During the time of visitation a “Reflection of Life” DVD Memorial Tribute featuring special people, places and events in Emma Jean’s life was presented to the family and friends. The funeral service was at 1:00 p.m. on Friday, January 11, 2019, at Wilson-McReynolds Funeral Home with Pastor David Milburn presiding. The prelude and postlude musical selections were presented by Daren Payne on the piano. Special vocal music selections presented during the service were “Travel On” by Daren Payne who accompanied himself on the piano and “Blessed Assurance” by Kenneth Edwards with the congregation joining in on the chorus with Gayla Taylor accompanying on the piano. Emma Jean’s niece, Patti (Lay) Howard read a special letter that was written to Emma Jean on her 80th birthday. Also presented during the service were two special vocal musical recordings by Emma Jean, “Let Me Walk With You Jesus” and “Bowed On My Knees”. At the conclusion of the service Darren Payne presented the vocal musical selection “Hello After Goodbye” accompanying himself on the piano. Interment followed next to her husband in Rose Hill Cemetery of Marion, with Rev. Kenneth Blumenstock presiding. Pallbearers were Terry Milburn, Drew White, Dale Lay, Keith Lay, Daryl Parks and Kevin Parks. Following the committal service at the cemetery it started to snow and the family and friends gathered at Pittsburg Free Will Baptist Church of Pittsburg, IL, for a meal and continued time of fellowship and support. For those who preferred, memorial contributions were made to “Camp Jericho” and mailed in care of Wilson-McReynolds Funeral Home, 900 N. Court Street, Marion, IL 62959. Memorial envelopes were available at the funeral home. For additional information please call the funeral home at 618-993-2131.

The family of Emma Jean McDonald created this Life Tributes page to make it easy to share your memories.

Send flowers to the McDonald family.