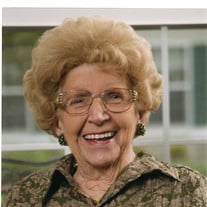 Eva L. Richey, age 92, of Marion, IL, passed away peacefully at 8:43 a.m. on Wednesday, April 22, 2015, in the N.H.C. Franklin Nursing Center of Franklin, TN. While living in Franklin, TN for the last five years she had resided at Morningside of Franklin Senior Living Center. She was born on Wednesday, May 3, 1922, in Logan, IL the daughter of Henry and Ella (Caldwell) Phillips. Eva attended school in Logan and Benton, IL and was a graduate of Benton High School in 1940. Following graduation she continued her education by attending Southern Illinois University of Carbondale, IL where she received her Bachelor’s of Education Degree. After graduation she was placed as a teacher at Thorn Thicket School, grades K thru 8 near Marion, in Williamson County. She was united in marriage to M.J. “Bud” Richey on Sunday, November 19, 1944, in Logan, IL and together they shared over fifty-two years of marriage until his death on January 23, 1997. After WW II ended, Bud was discharged from the Marine Corps and they moved to Marion. Eva soon began her long career of teaching in Marion, beginning at Jefferson School teaching 2nd grade. She remained at Jefferson for the next 20 years until she was transferred to Washington School teaching 3rd grade for another 20 years until her retirement in the mid 1980’s. Eva was a long time active member of Marion First Baptist Church. For the last five years while living in Franklin, TN, near her family, she attended West Franklin Baptist Church. Some of her other memberships include the National Education Association, the Teachers Credit Union and the Joy Singers of Marion First Baptist Church. In her spare time she enjoyed watching many different types of sports, working in her flowers and was always actively involved and interested in her family’s many different activities, especially those of her grandchildren. Eva had a set of guidelines she lived her life by and will be remembered as being a strong Southern Baptist, a proponent of higher education and an avid Republican. The many that have shared the years with her will now cherish the memories that have been created. She is survived by two daughters; Mary Ella Haddock of Memphis, TN and Jayne Ann Chapuis and her husband, Daniel of Franklin, TN; three grandsons, Eric Haddock and Travis Haddock both of Memphis, TN and Nathan Chapuis of Franklin, TN; granddaughter, Celia Jayne Chapuis of Franklin, TN; three great grandsons, Matthew James Haddock, Meric Haddock and Noah Haddock all of Memphis, TN; three great granddaughters, Madeline Haddock, Hannah Haddock and Bella Haddock all of Memphis, TN, other extended family and many friends. She was preceded in death by her parents, husband and five brothers, Bert, Louis, Arvel, Ward and Noble Phillips. Arrangements for Eva L. Richey were entrusted to Wilson-McReynolds Funeral Home, 900 N. Court St., Marion, IL. The time of the visitation was from 1:00 p.m. to 3:00 p.m. on Saturday, April 25, 2015, at the funeral home. Following the time of visitation the funeral service was at 3:00 p.m. with Rev. Brian Summers presiding and Rev. Alan Chamness presenting comments of memory. The prelude and postlude musical selections were presented by pianist, Byron Corzine. Special vocal musical selections presented during the service were “Beulah Land” and “How Great Thou Art” both by Rev. Alan Chamness who accompanied himself on the piano. The service concluded with First Baptist Church Joy Singers presenting the Promise Land Medley of “When We All Get to Heaven”, “When the Roll is Called Up Yonder” and “What a Day That Will Be” with recorded accompaniment. Interment followed next to her husband in Rose Hill Cemetery of Marion, IL. Pallbearers were Daniel Chapuis, Nathan Chapuis, Travis Haddock, Matthew Haddock, Eric Haddock and Alan Chamness. For those who preferred, memorial contributions were made to “First Baptist Church Music Ministries” and mailed in care of Wilson-McReynolds Funeral Home, P.O. Box 370, Marion, IL 62959. Memorial envelopes were available at the funeral home. For additional information please contact the funeral home by calling 618-993-2131.

Eva L. Richey, age 92, of Marion, IL, passed away peacefully at 8:43 a.m. on Wednesday, April 22, 2015, in the N.H.C. Franklin Nursing Center of Franklin, TN. While living in Franklin, TN for the last five years she had resided at Morningside... View Obituary & Service Information

The family of Eva L. Richey created this Life Tributes page to make it easy to share your memories.

Send flowers to the Richey family.