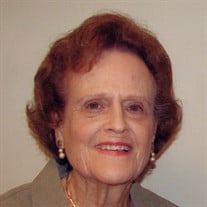 Evelyn Duncan, age 92, lifelong resident of Marion, IL, passed away peacefully with her family by her side at 9:50 a.m. on Sunday, July 13, 2014, at her home. She was born in Marion, IL on Friday, June 16, 1922, the daughter of Harvey and Ollie Mae (Sparks) Russell. Evelyn attended school in Marion and was a graduate of Marion High School. She was united in marriage to Robert W. Duncan on Sunday, March 7, 1943, in Baton Rouge, LA and together they shared over 70 years of marriage until his death on October 12, 2013. She was a long time member of the First Baptist Church of Marion, IL. Evelyn always enjoyed caring for her family and home, cooking, sewing and canning the vegetables she raised in her garden. She enjoyed traveling with her husband Bob and the many trips she shared with her family. She is survived by her daughter and son-in-law, Janice L. and Scott Magruder of Hattiesburg, MS; son, Steven L. Duncan of Marion, IL; grandson, David Magruder and wife, Crystal of Florence, AL; granddaughter, Heather Townsend and husband, Brian of Hattiesburg, MS; two great granddaughters, Devon Hayley Magruder and Madalynn Grace Magruder, other extended family and many friends. She was preceded in death by her parents; husband, Bob Duncan and three sisters, Louise Irwin, Geneva Magee and Helen Taylor. Arrangements for Evelyn Duncan were entrusted to the Wilson-McReynolds Funeral Home, 900 N. Court Street, of Marion, IL. The time of visitation was from 12:00 noon until 1:00 p.m. on Wednesday, July 16, 2014 at the funeral home. Following the time of visitation the funeral service was at 1:00 p.m. with Dr. Bob Dickerson presiding. Comments of memory were made by Evelyn’s daughter, Janice. The prelude and postlude musical selections were presented by pianist, Byron Corzine. Special vocal musical selections presented during the service were “Blessed Assurance” and “What a Friend We Have in Jesus” by Rev. Brian Summers with pianist, Byron Corzine accompanying. Other musical selections presented were “Because He Lives” as a congregational hymn, led by Rev. Brian Summers and accompanied by pianist, Byron Corzine and “Go Rest High on That Mountain” as a recorded selection by Cynthia Clawson. Interment followed next to her husband in Barham Cemetery of Marion, IL. Pallbearers were Bill Randall, Steve Duncan, Dean Hammonds, David Morgan, Todd Russell and Bob Wilson. After the committal service at the cemetery the family and friends gathered at O’Charley’s Restaurant in Marion, for a meal and continued time of fellowship and support. For those who preferred, memorial contributions were made to “Disabled American Veterans of Marion”. Memorial contribution envelopes were available at the funeral home or were mailed in care of Wilson-McReynolds Funeral Home, P.O. Box 370, Marion, IL, 62959. For additional information please contact the funeral home by calling 618-993-2131.

The family of Evelyn Duncan created this Life Tributes page to make it easy to share your memories.

Send flowers to the Duncan family.