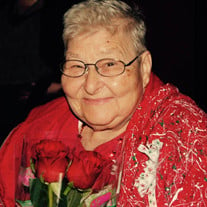 Evelyn Anna Holman, age 84, of Marion, IL, passed away peacefully with her family by her side at 11:58 a.m., on Wednesday, July 26, 2017 at her home. She was born in Oregon, IL on Thursday, March 30, 1933, the daughter of Terry and Esther Mae (Craig) Tripp. She grew up and attended school in Oregon, and later moved to Southern Illinois, first living in Creal Springs, before moving to Marion where she made her home for the past several years. Evelyn was united in marriage to Lawrence Holman on Tuesday, April 15, 1952, in Covington, IN and together they shared over thirty-nine years of marriage before his death on Tuesday, December 31, 1991. She was a member of the First United Methodist Church of Marion and for many years has attended First Baptist Church of Marion. Before moving to Southern Illinois she was a factory worker in Spring Valley and Mendota, IL and worked as a home nurses aid in Amboy, IL. She not only worked outside of the home, but also worked with that of a “Pioneer Spirit” at home raising her large family. She spent hours canning vegetables from the large garden they grew and what they didn’t use they shared with the neighbors. She spent a good portion of her time washing laundry with an old wringer washer and hung the clothes outside to dry. Evelyn cleaned her home relentlessly, while listening to good ole country music with some of her favorite singers being Johnny Cash, Elvis Presley, Conway Twitty and Loretta Lynn. She was a loving wife and mother who always enjoyed caring for her family and her home. Evelyn and her beautiful smile will be missed by all who knew and loved her. She is survived by her six daughters and one son-in-law, Marilyn Howell of Colorado, Isabelle Gates of Florida, Cassandra and Stanley Beggs of Marion, Patricia Besix of Marion, Elizabeth Messervey and fiancé Jim Zimmerman of Marion, Anna Smith of Arlington, IL; four sons and three daughters-in-law, David and Hermilyn Holman of Maricopa, AZ, Robert and Jean Holman of Dothan, AL, Jimmy and Mary Holman of Cocoa, FL and Donald Holman of Marion, a host of grandchildren and great-grandchildren; sister and brother-in-law, Irma and Amos Sommers of Metropolis, IL; brother and sister-in-law, Elmer and Lavonne Tripp of Rockford, IL, other extended family and many friends. She was preceded in death by her parents; husband, Lawrence Holman; daughter, Bonnie Holman; son, William Holman; infant son, Daniel Holman; grandchildren, Ronnie Holman, Michael Besix, Gregory Smith, Daniel Smith and Douglas Holman; sister, Winifred Coy; brother, Albert Tripp and daughter-in-law, Sara Ann (Gusman) Holman. Arrangements for Evelyn Anna Holman were entrusted to Wilson-McReynolds Funeral Home, 900 N. Court St., Marion. The visitation was from 11:00 a.m. until 12:00 noon on Saturday, August 5, 2017, at the funeral home. During the time of visitation a “Reflection of Life” DVD Memorial Tribute was presented to the family and friends featuring special people, places, and events of Evelyn’s life. Following the time of visitation the funeral service was at 12:00 noon at the funeral home with Dr. Bob Dickerson presiding. Evelyn’s daughter, Sandra Banks read a special poem and son, Don Holman presented comments of memory. The prelude and postlude musical selections were recorded piano selections. Special vocal musical selections presented during the service were “Angel” and “Hallelujah” both by Evelyn’s granddaughter, Ava Jones, who sang with a recorded accompaniment. Special recorded vocal musical selections presented during the service were “I.O.U.” by Jimmy Dean and “Will the Circle Be Unbroken” by the Carter Family. Interment followed at 3:00 p.m. on Saturday, August 5, 2017 in Bethel Cemetery in Swanwick, IL in Perry County. Those serving as pallbearers were Don Holman, Jimmy Holman, David Holman, Robert Holman, Eugene Jones, and Adam Holman. Those wishing to attend the committal service gathered at the cemetery prior to 3:00 p.m. For those who preferred, memorial contributions were made to, “Wilson-McReynolds Funeral Home”, to assist with the final expenses and mailed in care of Wilson-McReynolds Funeral Home, 900 N. Court Street, Marion, IL 62959. Memorial envelopes were available at the funeral home. For additional information please call the funeral home at 618-993-2131.

The family of Evelyn Anna Holman created this Life Tributes page to make it easy to share your memories.

Send flowers to the Holman family.