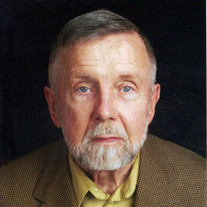 Floyd Espy Cunningham, of Marion, IL, passed away peacefully at 3:40 a.m. on Wednesday, July 19, 2017, in the Veteran’s Community Living Center in Marion, IL. He was born on Sunday, August 19, 1934, in Florence, AL, the son of Floyd Franklin and Helen Blanche (Espy) Cunningham. A graduate of Carbondale Community High School, he received his B.A. degree from Southern Illinois University in 1956, having attended one year at the American University of Cairo, Egypt. He obtained a Master’s Degree in Social Work from the University of Illinois in Champaign/Urbana, IL. He was a veteran of the U.S. Army, having been stationed in Arizona and in Germany. On Sunday, October 4, 1964, Floyd married Shirley Jean Combs in Percy, IL, and she survives in Marion, IL. Other survivors include daughter Denise (Scott) Svetly of Reedsburg, WI; son Brian (Janell) Cunningham of Wesley Chapel, FL; daughter Sandra Cunningham of Tampa, FL; grandson Aaron Svetly of Reedsburg, WI; sister JoAnn Hall of Ferguson, MO, three nephews and several great-nieces and nephews. He is also survived by special friends Marilyn Mitchell, Ed Jakobson, Bill Young and David Melby. He was preceded in death by his parents. During their marriage, Floyd and Shirley traveled from the Arctic Circle to Antarctica until the progression of Parkinson’s Disease became too limiting on his mobility. Floyd had a reverence for nature and during his lifetime he traveled all fifty United States, all seven continents, and over forty countries, exploring the wonders and beauty in the natural environment. He was also interested in the beliefs, practices, and languages of different populations. Floyd began a career in Human Services in 1956, as a caseworker for the Division of Child Welfare for the Illinois Department of Public Welfare. In 1964, he opened a Williamson County satellite office of the Southern Illinois Mental Health Clinic, a private, not-for-profit Corporation that had served Jackson County from Murphysboro since 1959. Effective January 1, 1970, he became the Administrator of the new not-for-profit corporation, Mental Health Services of Franklin & Williamson Counties, Inc. At that time the State of Illinois was undertaking the de-institutionalization of over 42,000 patients housed in psychiatric hospitals. Floyd was an active advocate for the development of community agency networks to serve these patients locally. When he retired in 1995, the Agency’s staff had grown from 5 in 1970 to a total of 279 employees, the largest and most comprehensive of the community agencies in rural Illinois. At that time, coordinated statewide efforts of public and private resources had reduced the inpatient population of state psychiatric hospitals to less than 7,000. Throughout his career he was active on local and statewide health and social service boards and committees, including serving terms as Chairman of Comprehensive Health Planning of Southern Illinois, Williamson County Programs on Aging, Illinois Association of Community Mental Health Agencies and the Southern Illinois Chapter of the National Association of Social Workers. Floyd’s professional awards included “Social Worker of the Year” in 1990 by the Southern Illinois Chapter of the National Association of Social Workers, “Outstanding Individual Achievement in Community Mental Health” in 1988 and “Lifetime Achievement Award” in 1995, both from the IACMHA. Floyd was a member of the Carbondale Unitarian Fellowship. Arrangements for Floyd Espy Cunningham were entrusted to Wilson-McReynolds Funeral Home, 900 N. Court St., Marion, IL. The visitation was from 5:00 p.m. until 8:00 p.m. on Friday, July 21st at the funeral home. During the time of visitation a “Reflection of Life” DVD Memorial Tribute featuring special people, places and events of Floyd’s life was presented to the family and friends. The funeral service was at 11:00 a.m. on Saturday, July 22, 2017, at Wilson-McReynolds Funeral Home, 900 N. Court St., Marion, IL, with Sarah Richards presiding. Also participating were Floyd’s daughter Denise Svetly who presented comments of memory; Floyd’s grandson Aaron Svetly who also presented comments of memory; Carol Conley who read a letter from Floyd’s daughter Sandra Cunningham; Brian Cunningham read a letter from Floyd’s wife Shirley Jean and also presented personal comments of memory. Comments of memory were also presented by Floyd’s friends Marilyn Mitchell and Roberta Blankenship. The prelude and postlude musical selections were recorded instrumental musical selections. Special recorded piano musical selections by Yiruma presented during the service were “River Flows In You”, “Spring Rain” and “Kiss the Rain”. Also presented was the recorded vocal musical selection “Wonderful World” by Louis Armstrong. Interment followed in Egyptian Memorial Gardens Cemetery of Energy. Pallbearers were Aaron Svetly, Joel Jungers, Martin Mares, Jeff Jungers, Lindsay Jungers and Bill Young. Military honors were accorded at the graveside by members of Heyde-Pillow V.F.W. Post No. 1301, American Legion Post No. 147 both of Marion and the Illinois National Guard Funeral Honors Burial Detail of Marion. Those participating were Commander and Officer of the Day Art Ambros, Chaplain Ron Ganzer, Bugler Bill Rice, Color Guard Bob Casey and Roger Morris, National Colors Bob Wallace and Firing Squad Gene Broombaugh, Don Burgrabe, Bill Hampsey, Tim Payne and Ron Russell. After the folding of the flag members of the Illinois National Guard Funeral Honors Burial Detail of Marion presented the flag to Shirley. Following the committal service at the cemetery the family and friends gathered at the First United Methodist Church of Marion for a meal and continued time of fellowship and support. For those who preferred, memorial contributions were made to “The Southern Illinois Parkinson’s Support Group” and mailed to P.O. Box 266, Carbondale, IL 62901 or in care of Wilson-McReynolds Funeral Home, 900 N. Court Street, Marion, IL 62959. Memorial envelopes were available at the funeral home. For additional information please contact the funeral home by calling 618-993-2131.

The family of Floyd Espy Cunningham created this Life Tributes page to make it easy to share your memories.

Send flowers to the Cunningham family.