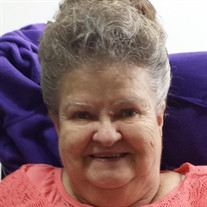 Frances L. (Vinson) Miller, age 77, of Ozark, IL, passed away suddenly at 8:27 p.m. on Sunday, December 26, 2021, in Harrisburg Medical Center of Harrisburg, IL. She was born on Thursday, December 21, 1944, in Carbondale, IL, the daughter of Daniel Clint and Ethel Marie (Williams) Vinson. Frances attended at school at New Simpson Hill and high school in Vienna, IL, and was a graduate of Vienna High School Class of 1962. She continued her education in Fresno, California, and became a Licensed Practical Nurse. She began her long working career working in nursing at the San Bernadino, CA Hospital. She then moved back to Southern Illinois and began working at the Marion Veteran’s Hospital and later at the Menard Correctional Facility in Chester, IL. For the last 16 years she has worked at Angel Acres Care Center, located southeast of Marion. She was united in marriage to Melvin “Mel” Miller on Wednesday, October 20, 1999, in Steelville, IL, and together they have shared over 22 years of marriage. She was a member of Community Chapel Church of Marion, where she loved worshiping her LORD and visiting with all her friends. In her spare time, she enjoyed listening to gospel singing, spending time in the outdoors, fishing, camping and was an avid fan of the old television show, “Gunsmoke.” She loved all her large family and always looked forward to the many times they all gathered together. She enjoyed hearing about and was interested in all their many different activities going on. The many memories created will now be cherished by those she leaves behind. She is survived by her husband, Melvin “Mel” Miller of Ozark, IL; two daughters, Terra Farris and husband, Gary of Goreville, IL and Amberley Denton of McPherson, KS; three sons, Timothy Hunt and wife, Marilyn of Jacksonville, FL, James Hunt and wife, RaGina of Marion, IL and Keith Miller and wife, Karen of Preston, MN; ten grandchildren, Amanda Pritchett and special companion, Jody Green of Ada, OK, Tiffany Jackson and husband, Scott of The Villages, FL, Thomas Hunt of Jacksonville, FL, Mia Hunt of Jacksonville, FL, James Hunt III and wife, Taylor of Marion, IL, Kimberly Hunt and fiancé, Garrett Dillavou of Herrin, IL, Sarah Denton of Wichita, KS, Katherine Denton of McPherson, KS, John Thomas Denton of McPherson, KS and Nathan Henry Miller of Preston, MN; eight great grandchildren, Dakota VanCleve and fiancé, Miranda Ragsdale of Harrisburg, IL, Justin Clay of Johnston City, IL, Chase Pritchett and fiancé, Graci Doggett of Harrisburg, IL, Wes VanCleve of Paducah, KY, Caden Hopkins of Ada, OK, Cyleigh Holle of Effingham, IL, Jaycee Pritchett of Ada, OK and Kayloni Dillavou of Herrin, IL; three great-great grandchildren, Raelynn VanCleve, Emeri Pritchett and Daxton VanCleve all of Harrisburg, IL; sister, Geraldine Doss of Crab Orchard, IL; sister-in-law, Carol Perko and husband, Gary of Pheonix, AZ, other extended family and many friends. She was preceded in death by her parents; granddaughter, Nikkie Brogan; two grandsons, Steven Clay and J.R. Clay; two sisters, Pauline Donelson and Geneva Pike and brother, Donald Leon Vinson. Arrangements were entrusted to Wilson-McReynolds Funeral Home, 900 North Court Street, Marion, IL. The visitation was on Thursday, December 30th, from 5:30 p.m. to 8:00 p.m. at the funeral home. During the time of visitation, a “Reflection of Life” DVD Memorial Tribute featuring special people, places and events in Frances’ life was presented to the family and friends. The funeral service was at 11:00 a.m. on Friday, December 31, 2021, at Wilson-McReynolds Funeral Home with Rev. Don Colson presiding. Frances’ granddaughter, Kimberly Hunt presented a special poem called “Heaven’s Grocery Store.” Special musical selections presented during the service were; “I Call It Home” by Rev. Joe Lawson who accompanied himself on the guitar, “You Are All Invited to My Mansion” by Rev. Pete Slivinski who accompanied himself on the piano and “How Great Thou Art” by Mary Lawson who accompanied herself on the guitar. Interment followed near her parents, in New Salem Cemetery south of Creal Springs, IL, in Johnson County. Pallbearers were James Hunt III, Kimberly Hunt, Dakota VanCleve, Justin Clay, Wes VanCleve and Chase Pritchett. Following the committal service at the cemetery the family and friends gathered at Community Chapel Church in Marion, for a meal and continued time of fellowship and support. The family requested for those who preferred, memorial contributions be given to “Angel Acres.” For additional information call the funeral home at 618-993-2131.

The family of Frances Lucille Miller created this Life Tributes page to make it easy to share your memories.