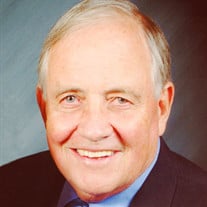 Gary Edward Eason, age 83, of Marion, IL, passed away peacefully at 8:15 p.m. on Thursday, December 21, 2017 at his home in Marion. He was born on Thursday, August 2, 1934 in Marion, IL, the son of Charles Webster “Web” and Anna Pearl (Shreve) Eason. Gary attended school in Marion and was a graduate of Marion High School Class of 1952. After graduation Gary answered the call of his nation by enlisting in the United States Army, serving during the Korean War. After his period of faithful service he was honorably discharged in 1955 with the rank of Corporal. Gary continued his education at Southern Illinois University in Carbondale and obtained his Bachelor’s Degree in Education. He was united in marriage to Shirley June Darter on June 18, 1957 and together they have shared over 60 years of marriage. Gary’s working career was with the Social Security Administration in Cape Girardeau, MO for 23 years, and he was District Manager when he retired. He was a member of the Second Baptist Church of Marion and Heyde-Pillow V.F.W. Post No. 1301 and American Legion Post No. 147 both of Marion. He was an avid Bears fan and fisherman, enjoying going to Florida to fish in the winter and collecting antique fishing items. Though he always was busy the most important part of his life was family. He was always interested in all of their many activities. The many memories that have been created will now be cherished by those he leaves behind. Gary is survived by his wife, Shirley J. Eason, of Marion; two daughters and one son-in-law, Gayla Jo Eason of Nashville, TN and Kimberly Ann and Wynn Rust of Cocoa Beach, FL; one son, Michael Scott Eason of Cape Girardeau; six grandchildren, Jefferey and Chelsie East, Lauren and Drew Yancey, and Erik, Rachel, Rebekah, and Sarah Rust; five great grandchildren, Elle and Thomas Eason Yancey and Avery, Sam, and Drew East; sister-in-law, Jo-Nell Blue of Marion; brother-in-law, Mike and Bonnie Darter, other extended family, and many friends. He was preceded in death by his parents, Web and Ann Eason. Ann Eason. Arrangements were entrusted to Wilson-McReynolds Funeral Home, 900 N. Court St., Marion. The visitation was from 1:00 p.m. until 2:00 p.m. on Wednesday, December 27, 2017, at the funeral home. During the time of visitation a “Reflection of Life” DVD Memorial Tribute featuring special people, places and events in Gary’s life was presented to the family and friends. Following the time of visitation, the funeral service was at 2:00 p.m. with Rev. Ashby Tillery presiding. The prelude musical selection was “Clair de Lune” as a recorded piano selection. Special recorded vocal musical selections presented during the service were “How Great Thou Art” by Carrie Underwood, “Amazing Grace” by Judy Collins and “Let There Be Peace on Earth” by Vince Gill. The postlude musical selections were recorded piano selections. Interment followed in Odd Fellows Cemetery of Marion, IL. Pallbearers were Robert Drone, Mike Darter, Erik Rust, Wynn Rust, Jeffrey East and Drew Jancey. Military honors were accorded at the cemetery by members of Heyde-Pillow V.F.W. Post No. 1301 and American Legion Post No. 147 both of Marion and members of the United States Army National Guard Funeral Honors Burial Detail. Those participating were Commander and Chaplain, Art Ambrose; Officer of the Day, Ernie Rinella; Bugler, Bill Rice; Color Guard, Bob Casey and Merlin Koester; National Colors, Ron Phillips; VFW Post Colors, Roger Morris and Firing Squad, Don Burgrabe, Bill Hampsey, Ray Hancock, Tim Payne, Bob Wallace and Fred Read. Members of the United States Army National Guard Funeral Honors Burial Detail participating in the folding of the flag were Sergeant Garret Lukens and SPC Hunter Levan. Presentation of the folded flag to Shirley was by SPC Hunter Levan. For those who preferred, memorial contributions were made to either or both “St. Jude Children’s Research Hospital” or “Hospice of Southern Illinois” and mailed in care of Wilson-McReynolds Funeral Home, 900 N. Court Street, Marion, IL 62959. Memorial envelopes were available at the funeral home. For additional information call the funeral home at 618-993-2131.

The family of Gary Edward Eason created this Life Tributes page to make it easy to share your memories.

Send flowers to the Eason family.