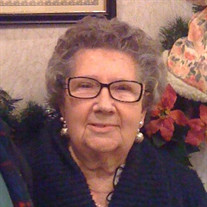 Gen B. Thomas, age 89, of Marion, IL passed away peacefully at 5:00 a.m. on Sunday, July 6, 2014, at Carbondale Rehab and Nursing Center of Carbondale, IL. She was born on Saturday, May 30, 1925, near Blytheville, AR the daughter of Jesse and Berneice (Alexander) Brake. Gen was united in marriage to Val Jean Thomas on Saturday, June 21, 1947, in Johnston City, IL and together they shared over forty-four years of marriage until his death on August 7, 1991. Early in her working career she was a bookkeeper for Marion Motors, Brewster Motors of Herrin and the Marion Mining and Reclamation Office. After her marriage she remained at home seeing to the needs of her husband, children and managing her home. She was a longtime active member of the First Presbyterian Church of Marion, IL where she sang in the choir and served on many of the church’s committees until her health forced her to slow down. She also was a member of US Coast Guard Ladies Auxiliary and the University of Illinois Home Extension. Gen kept busy, but she always had time for her family and many friends and looked forward to the many times when they all gathered together. She is survived by two sons and daughters-in-law, Kevin Thomas and Theresa Hovick-Thomas of Spring Bay, IL and Kelly and Trina Thomas of Carbondale, IL; granddaughter, Valerie Thomas of Spring Bay, IL; step grandson, Will Lyons of Van Nuys, CA; sister, Ruth Vavak of Baldwin, MO; two brothers and sisters-in-law, Tom and Lucille Brake of Santa Clarita, CA and Bill and Mary Brake of Rialto, CA; brother-in-law, Walter Piotter of Banning, CA, other extended family and many friends. She was preceded in death by her parents, husband and sister, Rose Piotter. Arrangements for Gen B. Thomas were entrusted to Wilson-McReynolds Funeral Home, 900 N. Court St., Marion, IL.A time of visitation for family and friends was on Tuesday, July 8th from 5:00 p.m. until 7:00 p.m. at the funeral home. Visitation resumed after 9:30 a.m. on Wednesday morning, July 9, 2014, at the First Presbyterian Church, located at 1200 South Carbon St., Marion until the time of the service. Following the time of visitation the funeral service was at 11:00 a.m. with Rev. Wade Halva presiding. Comments of memory were presented by Gen’s former pastor and special friend, Rev. Dan Whitfield. The prelude and postlude musical selections were presented by organist, Herb Goeltzer. Special vocal congregational hymns presented during the service were “The Old Rugged Cross” and “Amazing Grace” accompanied by organist, Herb Goeltzer. Special meditation organ selection presented during the service was “In the Garden” by organist, Herb Goeltzer. Interment followed next to her husband in Maplewood Cemetery of Marion, IL. Pallbearers were Jason Newsome, Anthony Rinella, Jack Reed, Jak Tichenor, Dave Rosenhauer and Jon Schaefer. Following the committal service at the cemetery the family and friends gathered back at First Presbyterian Church for a meal and continued time of fellowship and support. For those who preferred, memorial gifts in memory of Gen B. Thomas were made to either “First Presbyterian Church” or “Marion Medical Mission.” Memorial contribution envelopes were available at the funeral home and the church or were mailed in care of Wilson-McReynolds Funeral Home, P.O. Box 370, Marion, IL 62959. For additional information please contact the funeral home by calling 618-993-2131.

Gen B. Thomas, age 89, of Marion, IL passed away peacefully at 5:00 a.m. on Sunday, July 6, 2014, at Carbondale Rehab and Nursing Center of Carbondale, IL. She was born on Saturday, May 30, 1925, near Blytheville, AR the daughter of Jesse and... View Obituary & Service Information

The family of Gen B. Thomas created this Life Tributes page to make it easy to share your memories.

Send flowers to the Thomas family.