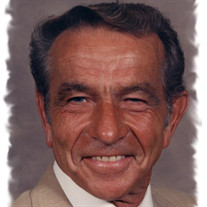 Delmar Gene Anderson, age 80, of Marion, IL, passed away peacefully with his family by his side at 5:35 p.m. on Tuesday, November 4, 2014, at his home. He was born on Sunday, May 20, 1934, in rural Williamson County, IL the son of Loren Adolphus and Katherine Louise (Richard) Anderson. He was united in marriage to Elva Lee McCree in Marion, IL on Friday, June 3, 1955, and together they have shared the last fifty-nine years of marriage. Gene was a carpenter during his early working years, working on smaller jobs in the area. He later began working for Southern Homes of Marion, IL in 1955, and eventually became foreman of their window department until he started his own business in 1962. For the next thirty-one years he owned and operated Gene Anderson Building Contractor, building specialty homes and other projects in the area until he retired from construction in 1993. In 1994 he began working for the City of Marion as their building inspector until fully retiring in 2003. He is a member of the First Baptist Church of Marion, IL, and taught Sunday school for many years and served on the building committee. He also served on the board of the Marion Senior Citizens for several years. Gene was known for his bird dogs and his passion for quail hunting. He raised and bred English Setters and also competed in field trials, winning many times. Each year he looked forward to the opening day of quail season and during his lifetime has enjoyed and walked thousands of miles watching his dogs work in pursuit of quail. He made many quail hunting trips to Kansas, pheasant hunting trips to northern Illinois and grouse hunting trips to northern Michigan. He also enjoyed gardening and spending time on his farm northeast of Marion. Though he always kept busy during his lifetime with work and his other interests the most important part of his life was his family. He always looked forward and enjoyed the times they would all gather together and treasured all the memories that were created. He is survived by his wife, Elva L. Anderson of Marion, IL; son, Jeffrey Anderson and his fiancé, Ramona Robison both of Marion, IL; three daughters and two sons-in-law, Dinah and Ed Maher of Reno, NV, Theresa Anderson and Regina and Dan Fox all of Marion, IL; six grandchildren, Sarah and Joe Acosta of Dalton, GA, Adam Anderson of Marion, IL, Kacey Maher of Las Vegas, NV, Nick Vitullo of Barnhart, MO and Benjamin and Allison Fox both of Marion, IL, two great granddaughters, two step-great grandsons; sister-in-law, Mary Ealey of Olney, IL, a host of nieces and nephews, other extended family and many friends. He was preceded in death by his parents; sister, Elnora Otey and six brothers, Coy “Cork”, Carl “Preach”, Paul “Pete”, Alfred “Spud” and Donald “Coon” Anderson and Marshall Anderson who passed away as an infant. Arrangements for Delmar Gene Anderson were entrusted to the Wilson-McReynolds Funeral Home, 900 N. Court Street, of Marion, IL. The time of visitation was from 5:00 p.m. until 8:00 p.m. on Friday, November 7th at the funeral home. During the time of visitation a “Reflection of Life” DVD Memorial Tribute featuring special people, places and events of Gene’s life was presented to the family and friends. The funeral service was at 11:00 a.m. on Saturday, November 8, 2014, at Wilson-McReynolds Funeral Home with Dr. Bob Dickerson presiding. The prelude and postlude musical selections were presented by pianist, Byron Corzine. Special instrumental musical selection presented during the service was “Amazing Grace” as a medley by pianist, Byron Corzine. Special vocal musical selection presented was “How Great Thou Art” by Iretta Stephens with pianist, Byron Corzine accompanying. Interment followed in Rose Hill Cemetery of Marion, IL. Pallbearers were Gene’s grandchildren; Sarah Acosta, Adam Anderson, Kacey Maher, Nick Vitullo, Benjamin Fox and Allison Fox. Following the committal service at the cemetery the family and friends gathered at First Baptist Church for a meal and continued time of fellowship and support. For those who preferred, memorial contributions were made to either “First Baptist Church Building Fund” or “Marion Senior Citizens Center”. Memorial contribution envelopes were available at the funeral home or were mailed in care of Wilson-McReynolds Funeral Home, P.O. Box 370, Marion, IL, 62959. For additional information, please call the funeral home at 618-993-2131.

Delmar Gene Anderson, age 80, of Marion, IL, passed away peacefully with his family by his side at 5:35 p.m. on Tuesday, November 4, 2014, at his home. He was born on Sunday, May 20, 1934, in rural Williamson County, IL the son of Loren Adolphus... View Obituary & Service Information

The family of Gene Anderson created this Life Tributes page to make it easy to share your memories.