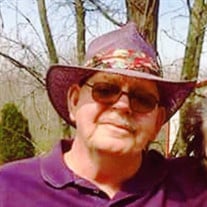 George Franklin Lee Beckwith, age 65, of Creal Springs, IL, passed away at 9:42 p.m. on Sunday, August 6, 2017, in Memorial Hospital of Carbondale, IL. He was born on Saturday, May 31, 1952, in Alton, IL the son of Franklin and Phyllis Charlene (Baker) Beckwith. He answered the call of this nation by serving in the United States Army from 1970 until he was honorably discharged in 1972. He then continued to serve in the Army Reserves and the Army National Guard until his discharge in 1998 with the rank of Sergeant First Class. George was united in marriage to Kathy Ann Rhynes on Saturday, June 8, 1974, in Boydsville, AR and together they have shared over 43 years of marriage. He began his long career with the US Fish & Wildlife in 1978 in Corning, AR and later in 1982 transferred to Crab Orchard National Wildlife Refuge, until his retirement in 2008. He also taught a Waste Water Management night course at John A. Logan College for many years until he retired in the mid 2000’s. George was a member of New Beginnings Baptist Church of Marion. In his spare time he enjoyed playing music with any stringed instrument, playing music at church, building and repairing musical instruments, woodworking, gardening and fishing when he was younger. He loved his family and enjoyed the many times they were all together. The memories that have been created will now be cherished by those he leaves behind. He is survived by his wife, Kathy A. Beckwith of Creal Springs; two sons and daughters-in-law, Nat and April Beckwith of Christopher, IL and Chris and Angela Beckwith of Marion; two granddaughters, Jasmine Beckwith of Cambria, IL and Kylie Beckwith of Christopher; two sisters and one brother-in-law, Tamira and Matt Miller of Bush, LA and Charlene Walker of Poplar Bluff, MO; two brothers, Carl Beckwith of Fairdealing, MO and Robert Beckwith of Virginia; sister-in-law, Linda Tullos and husband Ron of Campbell, MO; two brothers-in-law, Arlon Rhynes and wife Ilsa of Marmaduke, AR and Larry Rhynes and wife Carolyn of Ash Flat, AR; close friends, Ron and Shirley Hensley of Carterville, IL, other extended family and many friends. He was preceded in death by his parents; two brothers, Timothy and Wiley Beckwith and half sister, K.T. Roes. Arrangements have been entrusted to Wilson-McReynolds Funeral Home, 900 N. Court St., Marion, IL. The visitation will be from 11:00 a.m. until 1:00 p.m. on Saturday, August 12th at the funeral home. Following the time of visitation the memorial service will be at 1:00 p.m. with Pastor Bob McKnight presiding. Interment will be in Mound City National Cemetery of Mound City, IL at 12:30 p.m. on Monday, August 14, 2017. Those wishing to attend the committal service should gather at the cemetery prior to 12:30 p.m. Military honors will be accorded at the graveside by Veteran Members of the National Cemetery Area and the Illinois National Guard Funeral Honors Burial Detail of Marion. For those who prefer, memorial contributions may be made to “Kathy Beckwith” and mailed in care of Wilson-McReynolds Funeral Home, 900 N. Court Street, Marion, IL 62959. Memorial envelopes will be available at the funeral home. For additional information please call the funeral home at 618-993-2131.

George Franklin Lee Beckwith, age 65, of Creal Springs, IL, passed away at 9:42 p.m. on Sunday, August 6, 2017, in Memorial Hospital of Carbondale, IL. He was born on Saturday, May 31, 1952, in Alton, IL the son of Franklin and Phyllis Charlene... View Obituary & Service Information

The family of George Franklin Lee Beckwith created this Life Tributes page to make it easy to share your memories.

Send flowers to the Beckwith family.