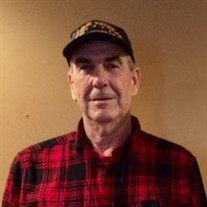 George E. Odle, age 79, of Marion, IL passed away peacefully at 2:15 p.m. Monday, September 30, 2019 in Parkway Manor in Marion, IL. George was born on Thursday, September 26, 1940, at home on the family farm in Hamilton County, IL, the son of Ted and Edna Katherine Matilda (Senner) Odle. George grew up on the family farm in Hamilton County and was a graduate of McLeansboro High School class of 1958. He answered the call of his country and entered the United States Army in 1963 and was honorably discharged in 1965. During his working years and before his retirement he worked hard, often working double shifts for the Stephen Chemical Company in Joliet, IL. George always enjoyed being out in the country hunting, especially quail, pheasant and his favorite, deer. He also enjoyed fishing whenever he could. He enjoyed NASCAR Racing and his favorite driver was Jeff Gordon. His favorite car was a Pontiac GTO and after being discharged from the Army he purchased a 1966 Pontiac GTO and next a 1968 GTO and he later purchased a restored Black two door hard top GTO which he later gave to his grandson Cory. He was an honorable man who cherished and loved his family and was always interested in their many activities, especially those of his children and grandchildren. The many memories that have been created will now be cherished by those he leaves behind. He is survived by his two daughters, Andrea Dawn Wilson and Danelle Belcher and her husband Jason Belcher of Manteno, IL; three grandchildren, Cory Christer, who he raised, and his wife Samantha of Manteno, IL; Trace Malmer and Carlie Malmer; one great grandson, Noah Christer of Manteno, IL; two sisters, Mary Lou Odle of Anna, IL and Anne Odle of Pflugerville, TX, two brothers, James F. Odle of Marion and Bill and Bonnie Odle of Rio Rancho, NM; and a host of nieces and nephews, other extended family and many friends. He was preceded by his parents; two sisters, Dorothy Brown and husband, Arthur and Betty Hutton and husband Bob and one sister-in-laws, and Anita May Odle. Arrangements have been entrusted to Wilson-McReynolds Funeral Home, 900 N. Court St., Marion. The visitation was from 1:00 p.m. until 2:00 p.m. on Sunday, October 6th, at the funeral home. Following the time of Visitation the funeral service was at 2:00 p.m. with Rev. Matthew Hartline presiding. The prelude and postlude were recorded musical selections. Special musical selections presented during the service were, “How Great Thou Art”, by Randy Travis and “Amazing Grace”, by Alan Jackson. Interment followed in Rose Hill Cemetery in Marion, IL. Pallbearers were Ted Odle, Danny Brown, Corey Christer, Kent Morris, Steven Abbott and Jason Belcher. For those who preferred, memorial contributions were made to the “Alzheimer’s Association” and mailed in care of Wilson-McReynolds Funeral Home, 900 N. Court St, Marion, Illinois 62959. Memorial envelopes were made available at the funeral home.

The family of George Edward Odle created this Life Tributes page to make it easy to share your memories.

Send flowers to the Odle family.