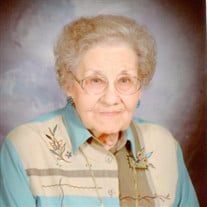 Georgia E. Ruhe, age 100, of Marion, IL passed away peacefully with her family by her side at 11:14 a.m. on Wednesday, August 22, 2018, at her home. She was born on Wednesday, September 19, 1917, in Marion, the daughter of Harry M. and Edith Inez (Parrish) Davis. Georgia was united in marriage to Carl Fred Ruhe on Sunday, November 5, 1939, in the Zion United Church of Christ of Marion and together they shared over 64 years of marriage until his death on Wednesday, March 3, 2004. During the years of her working career she was a cosmotologist and also secretary at West Richmond Heights Grade School for several years while living in Missouri. The majority of her lifetime she remained at home seeing to the needs of her family and managing her home. When her boys were young she served as Den Mother for the Cub Scouts. Georgia was a member of the First Presbyterian Church of Marion and also a member of the New Bloomfield Chapter No. 138 Order of the Eastern Star of New Bloomfield, MO. In her spare time she enjoyed antiquing, reading, and taking care of her flowers and plants. She loved her family and always looked forward to the many times they all would be together. She cherished the memories created and those she leaves behind will always cherish the many memories. She is survived by two sons and daughters-in-law, Carl F. and Linda Marcum Ruhe of Marion and James H. and Linda Ruhe of Desoto, IL; two grandchildren, Heather L. Fear and her husband, Kevin, and Eric B. Ruhe and his wife, Sarah, all of Goreville, IL; three great grandchildren, Joyanna Ruhe and Jaden Ruhe both of Goreville, IL and Emily Hunt of Nashville, TN; four step grandchildren, Jennifer Marcum of Streamwood, IL, Daniel Marcum of Cambria, IL and Jack Doan and his wife Karen and Keith Doan all of Carbondale, IL; two nieces, Julie Douglas and her husband, Warren, of Marion and Georgann Scally of Santa Cruz, CA, nephew, Steve Davis of New Smyrna Beach, FL, other extended family, and many friends. She was preceded in death by her parents, husband; brother, Harry L. Davis and his wife, Betty and sister-in-law, Edna Valentine and her husband, Fred. Arrangements for Georgia E. Ruhe were entrusted to Wilson-McReynolds Funeral Home, 900 N. Court St., Marion. The visitation was from 12:00 p.m. until 2:00 p.m. on Friday, August 24, 2018, at the funeral home. Following the time of visitation the funeral service was at 2:00 p.m. with Pastor Dan Whitfield presiding. The prelude and postlude musical selections were recorded piano selections. Special recorded musical selection presented during the service was an instrumental of “In the Garden” by Terri Geisel. During the service special comments of memory were presented by son, Carl, and granddaughter, Heather Fear. Interment followed next to her husband in Cana Cemetery located north of Goreville, IL. Those serving as pallbearers were Carl Ruhe, James Ruhe, Eric Ruhe, Kevin Fear, Jack Doan, and Garrett Underwood. Following the graveside committal service at the cemetery, family and friends gathered at Eric and Sarah’s home for a meal and continued time of fellowship and support. For those who preferred, memorial contributions were made to “First Presbyterian Church” and mailed in care of Wilson-McReynolds Funeral Home, 900 N. Court Street, Marion, IL 62959. Memorial envelopes were available at the funeral home. For additional information please call the funeral home at 618-993-2131.

The family of Georgia Edith Ruhe created this Life Tributes page to make it easy to share your memories.

Send flowers to the Ruhe family.