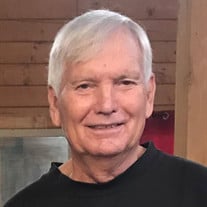 Gerald H. “Herb” “Jerry” Davis, age 72, of rural Marion, IL, passed away peacefully with his wife near his side, at 4:09 a.m. on Tuesday, November 9, 2021, in Landmark Hospital of Cape Girardeau, MO. He was born on Sunday, May 22, 1949, in Goreville, IL, the son of Herbert Brown and Marjorie L. (Jackson) Davis. Herb attended school in Goreville and was a graduate of Goreville High School Class of 1967. He answered the call of this nation in March of 1969, by serving in the United States Army during the time of the Vietnam War. He was a dog handler seeking out land mines and was the recipient of the Bronze Star. After his period of faithful service, he was honorably discharged with the rank of Specialist 4th Class in November of 1970. His working career was as a heavy equipment operator working in construction and was a 50-year member of the International Union of Operating Engineers Local Union No. 318 of Marion, and retired in 2009. He was united in marriage to Deanna Gaye Perry on Saturday, February 15, 1986, in the home of her parents, Kenneth and Alma Perry, who lived in the Poordo-Angelville area northeast of Marion, and have enjoyed over 35 years of marriage. Herb was an active devoted member of the Lighthouse Apostolic Church of Marion. He was known as being “A Servant” and would always be willing to serve in any capacity when asked or when he saw items that needed done. He loved to participated in church functions and plays. He was known as being a very quiet and observant person and listener. He loved to sing the bass while singing gospel songs with others. Though he always kept busy, one of his other things he enjoyed doing was attending his grandchildren’s sporting events, and would very seldom ever miss. The many times the family would all gather together was special to him and the many memories created will now be cherished by those he leaves behind. He is survived by his wife, Deanna G. Davis of Marion; two step sons, Simon Lee King and his wife, Christi and Phillip Andrew King all of Goreville, IL; four step grandchildren, Lexi King and Abigail King both of Goreville, IL, and Madison King and Andrew King both of Pittsburg, IL; godson, Bentley Cameron of Marion; goddaughter, Emily Strange of AR; brother, Alan Davis and his wife, Jill of Decatur, IL; daughter-in-law, Sara King of Pittsburg, IL; mother-in-law, Alma L. Perry of the Poordo-Angelville area; brother-in-law, Herman Jenkens of Goreville, IL, other extended family and many friends. He was preceded in death by his parents; step son, Jonathan King; two sisters, Elaine Jenkens and Kay Reynolds and father-in-law, Kenneth Gus Perry. Arrangements were entrusted to Wilson-McReynolds Funeral Home, 900 North Court Street, Marion, IL. The graveside service was accorded at 12:00 noon on Saturday, November 13, 2021, in Mount Pleasant Freewill Baptist Church Cemetery, located northeast of Marion, of the Poordo-Angelville area, with Gerald’s brother-in-law, Pastor Oral Perry presiding and Gerald’s brother, Alan Davis presenting comments of memory. Special recorded vocal musical selections presented during the service were; “Amazing Grace-My Chains Are Gone” by Chris Tomlin and “Scars In Heaven” by Casting Crowns. Pallbearers were Simon King, Phillip King, Alan Davis, Joe Mathis, Andrew King and Corey Perry. Military honors were accorded at the graveside by members of Marion VFW Heyde Pillow Post No. 1301 Funeral Honors Detail and members of the United States Army Funeral Honors Detail. Interment followed near his step son, Jonathan King. Following the committal service at the cemetery the family and friends gathered at Angelville Community Church for a meal and continued time of fellowship and support. The family requested for those who prefer, memorial contributions be given to “Crab Orchard High School” to be used specifically to improve the boy’s baseball field. Memorial contributions were mailed in care of Wilson-McReynolds Funeral Home, 900 N. Court Street, Marion, IL, 62959. For additional information call the funeral home at 618-993-2131.

The family of Gerald Herbert "Herb" "Jerry” Davis created this Life Tributes page to make it easy to share your memories.