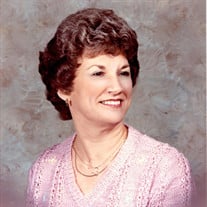 Geraldine “Geri” Bloodworth, age 82, of Marion, IL, passed away peacefully at 2:20 a.m. on Wednesday, September 23, 2020, in Integrity Healthcare and Nursing Center of Herrin, IL. She was born on Wednesday, April 20, 1938, in Jonesboro, IL, the daughter of William Riley and Almeda Beatrice (Allen) Dalton. Geri attended school in Marion, and was a graduate of Marion High School Class of 1957. She was united in marriage to the “Love of her Life” Eugene “Gene” Bloodworth on Saturday, September 13, 1958, in Marion, and together they enjoyed nearly 40 years of marriage until his death on Tuesday, August 4, 1998. Geri’s working career began early in her lifetime working for Barger Tax Service of Marion, later with Diagraph Bradley of the Ordill Area west of Marion, “Toppers Ladies Clothing” located on the Marion Square and finally with Sears located at the Marion Mall until her retirement. She was a Christian and attended at the Abundant Life Assembly of God Church of Marion. In her spare time she enjoyed caring for her family and home, working in her flowers and yard, listing to music, and absolutely loved going shopping for clothing. She was known for making wonderful deserts for the family gatherings. She also enjoyed attending various churches of the area with her family and going on family vacations. But later in her life came the birth of her only grandson, Joshua that she spent much of her time with going out to eat, shopping and spoiling him. He was a true blessing that came at special time in her life. The many memories created will now be cherished by those she leaves behind. She is survived by her son and daughter-in-law, David and Teresa Bloodworth of Marion; grandson, Joshua Bloodworth of Marion; sister-in-law, Wanda K. Dalton of Marion, several nieces and nephews, other extended family and many friends. She was preceded in death by her parents, husband; sister, Carol Lee Johns and brother, Billie Dee Dalton. Arrangements were entrusted to Wilson-McReynolds Funeral Home, 900 N. Court St., Marion, IL. The visitation was from 11:00 a.m. until 1:00 p.m. on Monday, September 28, 2020, at the funeral home. During the time of visitation a “Reflection of Life” DVD Memorial Tribute featuring special people, places and events in Geri’s life was presented to the family and friends. Following the time of visitation he funeral service will be at 1:00 p.m. with Pastor Jeff Baker presiding. The prelude and postlude musical selections were recorded piano selections. Special recorded vocal musical selections presented during the service were “Home” by Gerald Crabb and “On the Other Side” by Jimmy Fortune. Geri’s grandson, Joshua presented the vocal musical selection “Ellsworth” accompanying himself on the guitar. Interment followed next to her husband in Cana Cemetery, located north of Goreville, IL. Pallbearers were Bryce Parks, Brandon Black, Gary Robinson, Ronnie Black, Joshua Bloodworth and Jerry Hickey. For those who preferred, memorial contributions were made to “Hospice of Southern Illinois.” Memorial contributions were mailed in care of Wilson-McReynolds Funeral Home, 900 N. Court Street, Marion, IL 62959. Memorial contribution envelopes were also available at the funeral home. For additional information call the funeral home at 618-993-2131.

The family of Geraldine "Geri" Bloodworth created this Life Tributes page to make it easy to share your memories.