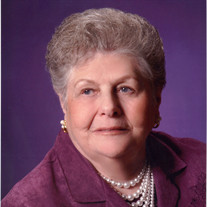 Bertha “Geraldine” Kelley, age 87, lifelong resident of Marion, IL, passed away peacefully with her family by her side at 3:45 a.m. on Wednesday, July 16, 2014, at home. She was born in Chicago, IL on Friday, May 6, 1927, the daughter of Cecil Franklin and Leona Cleotis (Merrick) Oliver. Geraldine grew up and graduated from high school in Pontiac, MI. She was a long-distance telephone operator, first with Bell Telephone for two years and retired after thirty-seven years with General Telephone Company in Marion, IL. She was united in marriage to Roy E. Kelley on Tuesday, July 29, 1947, in Marion, IL and together they shared over fifty-five years of marriage until his death on December 26, 2002. She was a long time active member of the Second Baptist Church of Marion, IL where she enjoyed her Sunday school class and her church family. Geraldine enjoyed shopping and eating out with her family and friends. She had many interests including watching old movies, working word search puzzles and reading. Most of all she enjoyed and looked forward to spending time with her family and many friends. She is survived by her two daughters, Pam Browning and husband, John of Marion, IL and Sharon Fuller and husband, Lyndell of Gilbert, AZ; nine grandchildren, Dr. Jason Browning and wife, Bridget of Paducah, KY, John Browning and wife, Leah of Marion, IL, Dr. Kelley Cunningham and husband, Aaron of Martinsville, IN, Lena Fox and husband, Johnny of New Burnside, IL, Nicole Ruble and husband, Tony of Washington, IN, Dana McInturf of Benton, IL, Wynter Deckman and husband, Ryan of Evansville, IN, Jamie Adams and husband, Don of Marion, IL and Tara Morse and husband, P. J. of Marion, IL; twenty-one great grandchildren, JoAnna Browning, Stetson Fox, Hannah Browning, Logan Browning, Zander Cunningham, Zechariah Browning, Linley Cunningham, Jackson Marks, Preston Fox, Gabriel Ruble, Levi Cunningham, Brayden Deckman, Kaylee McInturf, Addisyn Adams, Ashton Fox, Emmanuel Ruble, Taylor Deckman, Maddie Morse, Dillon McInturf, Annaleice Adams and Adyline Deckman, other extended family and many friends. She was preceded in death by her parents; husband, Roy E. Kelley; daughter, Lillie Kay Edwards; great-granddaughter, Abbie Adams and brother, Cecil Lee Oliver. Arrangements for Geraldine Kelley were entrusted to the Wilson-McReynolds Funeral Home, 900 N. Court Street, of Marion, IL. The time of visitation was from 5:00 p.m. until 8:00 p.m. on Friday, July 18th at the funeral home. During the time of visitation a “Reflection of Life” DVD Memorial Tribute featuring special people, places and events of Geraldine’s life was presented to the family and friends. The funeral service was at 11:00 a.m. on Saturday, July 19, 2014, at Wilson-McReynolds Funeral Home with Rev. Mark Mohler presenting special scripture and prayer, Dr. Bob Wagner presenting the eulogy and prayer and Dr. Jason Browning presenting the message. The prelude and postlude musical selections were recorded piano selections. The “Welcome” and “Opening Remarks” were presented by John D. Browning. Special vocal musical selections presented during the service were “Holes In the Floor of Heaven” by Jamie Adams who accompanied herself on the piano, “Something Beautiful” by Jamie Adams and John K. Browning with Jamie Adams accompanying on the piano, “The Lord’s Prayer” and “How Great Thou Art” both by John K. Browning with Jamie Adams accompanying on the piano, “When We All Get to Heaven” as a congregational hymn, led by John K. Browning and accompanied by Jamie Adams on the piano and “His Eye Is On the Sparrow” by Nicole Rubble with Gene Fuller accompanying on the piano. Interment followed next to her husband in Maplewood Cemetery of Marion, IL with Dr. Bob Wagner presenting the words of committal, Rev. Mark Mohler presenting the closing prayer and John K. Browning led the congregation singing the special musical selection “I’ll Fly Away.” Honorary pallbearers were Stetson Fox, Zander Cunningham, Logan Browning and Zech Browning. Active pallbearers were Johnny Fox, Aaron Cunningham, Tony Ruble, Ryan Deckman, Don Adams and Jim Richards. Following the committal service at the cemetery the family and friends gathered at Third Baptist Church in Marion for a meal that was given in partnership with Second Baptist Church of Marion. For those who preferred, memorial contributions were made to “The American Cancer Society”. Memorial contribution envelopes were available at the funeral home or were mailed in care of Wilson-McReynolds Funeral Home, P.O. Box 370, Marion, IL, 62959. For additional information please contact the funeral home by calling 618-993-2131.

The family of Geraldine Kelley created this Life Tributes page to make it easy to share your memories.

Send flowers to the Kelley family.