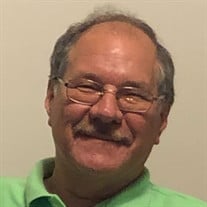 Gerry W. Boester, age 67, of Marion, IL, passed away suddenly at 11:07 a.m. on Sunday, February 9, 2020, in Heartland Regional Medical Center of Marion. He was born on Wednesday, August 13, 1952, in Carbondale, IL, the son of Gilbert John “Gib” and Betty June (Henry) Boester. Gerry attended school in Marion and was a graduate of Marion High School Class of 1970. Later as he got older he continued his education attending John A. Logan College and received two Associate Degrees; one in Coal Mining Technology and the other in Heating and Air Conditioning. He was united in marriage to Pamela Lynn Wooldridge on Friday, February 14, 1975, in Zion United Church of Christ of Marion, and together they have shared nearly 45 years of marriage. Gerry’s working career was as a coal miner having many positions including roof bolting, buggy driver, operating the continuous miner and as an inspector. He began his 30 year career in 1978, working for Old Ben Coal at their No. 24 Mine of Benton, IL. He later worked for the Inland Steel Coal Mine, that later became known as Consolidated Coal of Sesser, IL. Over the years he went back and forth working for the two mines. After the close of the Consolidated Coal Mine he finished his mining career working for American Coal of Galatia, IL, until his health forced him to retire in 2006. He was a member of the United Mine Workers of America International Local Union No. 1545. He loved his church was a very faithful member of the Marion Church of Christ and also served as church Deacon and Treasurer. He enjoyed studying the word of GOD and over the years had read the Bible front to back five times. In his spare time Gerry enjoyed his daily walks at Walmart, talking and visiting with his many friends, was an avid reader and spending time in the outdoors. He enjoyed cars and earlier in his lifetime was a NASCAR Fan and had attended many of the Indianapolis 500 Races. He always kept busy but the most important part of his life was his family. He was always interested in all of their many activities, especially those of his grandchildren. He was their biggest fan in anything they were involved in. The many memories that have been created will now be cherished by those he leaves behind. He is survived by his wife, Pamela L. Boester of Marion; two daughters and one son in law, Amber and Shawn Eldridge of Pacific, MO and Amanda “Mandy” Hughes of Marion; four grandchildren, Kyle Hughes and Ava Hughes both of Marion and Elizabeth Eldridge and Alli Eldridge both of Pacific, MO; mother, Betty J. Boester of Marion; sister and brother-in-law, Valerie and Doug Camden of Marion; two brothers and sisters-in-law, Danny and Ruth Boester of Boonville, IN and Russell and Kristi Boester of San Antonio, TX; father-in-law and mother-in-law, Eugene and Rhoda Wooldridge of Marion, several nieces and nephews, other extended family and many friends. He was preceded in death by his father. Arrangements have been entrusted to Wilson-McReynolds Funeral Home, 900 N. Court St., Marion. The visitation will be from 5:00 p.m. until 8:00 p.m. on Wednesday, February 12th, at the funeral home. The funeral service will be at 11:00 a.m. on Thursday, February 13, 2020, at Marion Church of Christ located at 1705 East DeYoung Street of Marion, with Minister Gerald Cowan and Minister Bill Brandstatter presiding. Interment will follow in Davis Prairie Cemetery located east of Marion. For those who prefer, memorial contributions may be made to “Muscular Dystrophy Association” and or “Marion Church of Christ Building Fund” and mailed in care of Wilson-McReynolds Funeral Home, 900 N. Court Street, Marion, IL 62959. Memorial envelopes will be available at the funeral home and the church. Those wishing additional information may call the funeral home at 618-993-2131.

The family of Gerry Wayne Boester created this Life Tributes page to make it easy to share your memories.

Send flowers to the Boester family.