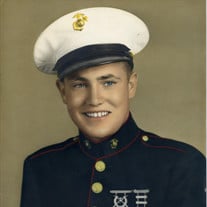 Gilbert H. “Gib” Smart, age 91, of Marion, IL, passed away peacefully at 4:10 a.m. Thursday, July 16, 2015, at his home. He was born on Friday, June 27, 1924, in Pittsburg, IL the son of Thomas Edward and Nellie B. (Grant) Smart. He answered the call of the nation by enlisting into the United States Marine Corps and was selected by and served Commanding General Long as his orderly and chauffer in Hawaii and San Diego, CA. After his period of faithful service he was honorably discharged with the rank of Sergeant. All during his lifetime he supported and was thankful to all who serve and had served in the military. Gib, as he was known, was united in marriage to Virginia M. Courtney on Wednesday, August 8, 1945, in Marion, IL and together they have enjoyed nearly 70 years of marriage. The majority of his working career was with the Williamson County Illinois Airport as head of maintenance and assistant airport manager until his retirement on February 28, 1988. He was an avid St. Louis Cardinals baseball fan and enjoyed watching college basketball, especially the Kentucky Wildcats. During his school years he played high school basketball and after high school played on adult teams. When he was younger he enjoyed quail hunting. He enjoyed taking care of his home and yard and would look forward to decorating his home for the different holidays. His family and especially his grandchildren were a very important part of his life and he always was interested in their many activities. All the memories that have been created will now be treasured by those he leaves behind. He is survived by his wife, Virginia M. “Ginnie” Smart of Marion, IL; daughter and son-in-law, Jayne Anne and Michael Coriasco of Carterville, IL; son, Jay Smart of Marion, IL; four grandchildren, Mark O’Brien and Jason O’Brien both of Carterville, IL and Justin Smart and his wife Callie and Benjamin Smart all of Marion, IL; three step grandchildren, Crystie Wright of Marion, IL, Stacy Lynn Coriasco of Rock Island, IL and Tara Mofield of Carterville, IL; three step great grandchildren, Cadynce Wright and Wren Stefan both of Marion, IL and Hayden Mofield of Carterville, IL; sister, Marynelle Wilkinson of Carrolton, TX, several nieces and nephews; special hospice nurse, Toni Merchant other extended family and many friends. He was preceded in death by his parents, six brothers and one sister. Arrangements for Gilbert H. “Gib” Smart were entrusted to Wilson-McReynolds Funeral Home, 900 N. Court St., Marion, IL. The time of the visitation was from 11:00 a.m. until 1:00 p.m. on Monday, July 20, 2015, at the funeral home. Following the time of visitation the funeral service was at 1:00 p.m. with Rev. William Rucker presiding. The prelude and postlude musical selections were presented by pianist, Lori Creamer. Special vocal musical selections presented were “How Great Thou Art” by vocalist, Ron Head with recorded accompaniment, “Always” by vocalist, Lori Creamer who accompanied herself on the piano and “The Lord’s Prayer” acapella by vocalist, Ron Head. The service concluded with the recorded musical selection “The Marine’s Hymn”. Interment followed in Freedom Cemetery south of Marion, IL. Pallbearers were Jay Smart, Chris Head, Mark O’Brien, Jason O’Brien, Justin Smart and Ben Smart. Military honors were accorded at the graveside by members of Heyde-Pillow V.F.W. Post No. 1301, American Legion Post No. 147 both of Marion, IL and the Illinois Army National Guard Funeral Honors Burial Detail. Those participating were; Commander, Vice Admiral Nancy Brown, USN Retired; Officer of the Day, Larry Largent; Chaplain, Ron Ganzer; Bugler, Jim Grieme; National Colors, Bob Casey; American Legion Colors, Wayne O’Connor; Color Guard, Jessie James and Bill Rice; Firing Squad, Don Burgrabe, Gene Broombaugh, Ralph DeVasier, Fred Read, Bill Hatfield, Bill Hampsey and Jerry Swisher. Folding of the flag was by SPC William Ott and SPC Vlad Noland. Presentation of the flag to Virginia was by SPC Vlad Noland. Following the committal service at the cemetery the family and friends gathered at the Smart’s home for a meal and continued time of fellowship and support. For those who preferred, memorial contributions were made to “Hospice of Southern Illinois” and mailed in care of Wilson-McReynolds Funeral Home, P.O. Box 370, Marion, IL 62959. Memorial envelopes were available at the funeral home. For additional information please call the funeral home at 618-993-2131.

The family of Gilbert Houston "Gib" Smart created this Life Tributes page to make it easy to share your memories.

Send flowers to the Smart family.