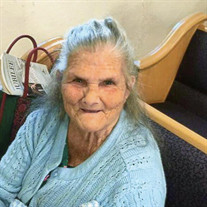 Gladys Guinn, age 83, of Johnston City, IL passed away peacefully with her family by her side at 1:45 a.m. on Sunday, January 7, 2018, at the home of her daughter, Sandra, in Herrin, IL. She was born on Thursday, February 8, 1934, in Tiptonville, TN the daughter of Alvin and Martha Mildred (Atwell) Smith. She was united in marriage to Harold Thomas Simmons in 1972 at Vienna, IL and together they shared 7 years of marriage until his death in March of 1979. Gladys was a homemaker the majority of her lifetime managing her home and seeing to the needs of her 9 children and many of her grandchildren and great grandchildren. She was a God loving woman and was an active member of the Apostolic House of Worship, located on Cherry Street in Marion. In her spare time she enjoyed spending time outdoors, gardening, fishing, working jigsaw puzzles and spending time with her family. She was always interested in all of their many activities and enjoyed the many times they all would be together. The many memories that have been created will now be cherished by those she leaves behind. She is survived by four daughters and two sons-in-law, Joycelyn Dravenstatt of Coulterville, IL, Lois Smith of Johnston City, Teresa and Rob Bradley of Marion and Sandra and Cliff Bennett of Herrin; five sons and one daughter-in-law, Jimmy Smith, Tommy Eugene Jackson and Leon Aderholt and his companion Gina Summers, Randy Aderholt and Eric Wayne and Mary Aderholt all of Johnston City, 20 grandchildren, 22 great grandchildren and 7 great-great grandchildren, other extended family and many friends. She was preceded in death by her parents, husband; daughter, Kathryn Ann Smith in 1952; great grandson, Albert; sister, Pearl McCraven in 1991 and two additional sisters as infants and two brothers as infants. Arrangements for Gladys Guinn were entrusted to Wilson-McReynolds Funeral Home, 900 N. Court St., Marion. The visitation was from 5:00 p.m. until 8:00 p.m. on Tuesday, January 9th, at the funeral home. During the time of visitation a “Reflection of Life” DVD Memorial Tribute featuring special people, places and events in Gladys' life was presented to the family and friends. The funeral service was at 11:00 a.m. on Wednesday, January 10, 2018, at Wilson-McReynolds Funeral Home with Pastor Robert Schierbaum presiding. The prelude and postlude musical selections were recorded piano selections. Special recorded vocal musical selections presented during the service were “Amazing Grace” by Alan Jackson, “I Saw the Light” by Hank Williams, Sr. and “Go Rest High On That Mountain” by Vince Gill. Interment followed next to her husband Harold Thomas Simmons in Vienna Cemetery, of Vienna, IL. Pallbearers were Royce Harris, Tommy Jackson, Devin Smith, Nick Raugust, Randy Aderholt and Eric Aderholt. Following the committal service at the cemetery the family and friends gathered at the Apostolic House of Worship for a meal and continued time of fellowship and support. For those who preferred, memorial contributions were made to either or both, “Apostolic House of Worship” and “Hospice of Southern Illinois” and mailed in care of Wilson-McReynolds Funeral Home, 900 N. Court Street, Marion, IL 62959. Memorial envelopes will be available at the funeral home. For additional information call the funeral home at 618-993-2131.

Gladys Guinn, age 83, of Johnston City, IL passed away peacefully with her family by her side at 1:45 a.m. on Sunday, January 7, 2018, at the home of her daughter, Sandra, in Herrin, IL. She was born on Thursday, February 8, 1934, in Tiptonville,... View Obituary & Service Information

The family of Gladys Guinn created this Life Tributes page to make it easy to share your memories.

Send flowers to the Guinn family.