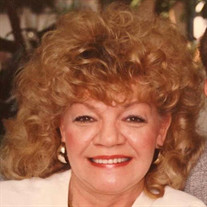 Gloria Jean Craig, age 75, of Marion, IL, passed away peacefully with her family by her side, at 11:50 p.m. on Thursday, March 8, 2018, in Herrin Hospital, of Herrin, IL. She was born on Sunday, July 12, 1942, in West Frankfort, IL, the daughter of Howard “J.B” and Eula Jean (Moore) Watson. Gloria’s family left West Frankfort when she was 6 years of age and moved to California where she lived her childhood years. She returned to the area in the late 1960’s to visit her aunt, and it was then she met Bobbie Dow Craig. They were united in marriage on Friday, June 20, 1969 in Marion and together they have shared nearly 49 years of marriage. Gloria never worked outside of the home but enjoyed managing her home and seeing to the needs of her family. She loved the Lord and was a Christian. Earlier in her lifetime she attended regularly at the First Church of God of Marion where she helped with bible school and crafts with the children. In her spare time she enjoyed working outside in her flowers, taking care of the family dog, and was known for her excellent cooking. She also loved changing the inside of her home and was always decorating and trying something new. When she was younger, she played the accordion and guitar, and her and her husband, Bob, would travel to many of the area churches, retirement centers, and high-rises singing. She always kept busy but her world was all about her family. She was always interested in all of their many activities, especially those of her grandchildren. She enjoyed the many times they all would be together and cherished the memories. The many memories that were created will now be cherished by those she leaves behind. She is survived by her husband, Bob D. Craig of Marion; two daughters and one son-in-law, Kim A. Bolen of Marion and Tammy J. and Steve Willmore of Opdyke, IL; two sons and one daughter-in-law, Rob H. and Anne Craig and Jody P. Craig all of Marion; five grandchildren, Miranda M. Hewlett of Marion, Sierra D. Hayes and her husband Dylan of Opdyke, Katie J. Willmore of Opdyke, Peyton A. Craig, and Nathan R. Craig both of Marion; great grandson, Brantley S. Hayes of Opdyke, other extended family, and many friends. She was preceded in death by her parents Arrangements were entrusted to Wilson-McReynolds Funeral Home, 900 N. Court St., Marion. The visitation was from 5:00 p.m. until 8:00 p.m. on Monday, March 12th at the funeral home. During the visitation a “Reflection of Life” DVD Memorial Tribute was presented to the family and friends and featured special people, places, and events of Jeanie’s life. The funeral service was at 11:00 a.m. on Tuesday, March 13, 2018, with Pastor Don Colson presiding. The prelude and postlude musical selections were recorded piano selections. Special recorded vocal musical selections presented during the service were “One Day at a Time,” by Cristy Lane, “Amazing Grace,” by Judy Collins, and “Go Rest High on That Mountain,” by Vince Gill. Interment followed next her parents in Odd Fellows Cemetery of Marion. Those serving as pallbearers were Dylan Hayes, Peyton Craig, Kerry Pulley, Brian Van Horn, Zack Odum, and Joe Taylor. Following the graveside committal service at the cemetery, family and friends gathered at the Second Baptist Church of Marion for a meal and continued time of fellowship and support. For those who prefer, memorial contributions may be made to “World Challenge” and mailed in care of Wilson-McReynolds Funeral Home, 900 N. Court St. Marion, IL 62959. Memorial envelopes will be available at the funeral home. For additional information call the funeral home at 618-993-2131.

The family of Gloria Jean Craig created this Life Tributes page to make it easy to share your memories.

Send flowers to the Craig family.