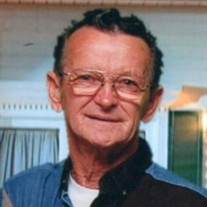 Gordon “Chigger” Holmes, age 81, of rural Creal Springs, IL, passed away peacefully at 9:10 p.m. on Tuesday, May 25, 2021, in Angel Acres Assisted Living Center of Marion, IL. He was born on Tuesday, April 23, 1940, at home of rural Creal Springs, near his present home, the son of Orbie Robert and Dixie Verne (Whiteside) Holmes. He attended school in Crab Orchard, IL, and was a graduate of Crab Orchard High School Class of 1958. Gordon answered the call of this nation by serving in the United States Army from 1963 until 1965, and after his period of faithful service was honorably discharged with the rank of Specialist 4th Class. He was united in marriage to Judy Ann (Edds) on Saturday, January 4, 1964; in the home of Judy’s brother Teddy, located south of Crab Orchard, IL, and together they shared over 53 years of marriage until her death on Thursday, January 12, 2017. His working career began as a mechanic; working for O.G. Turnage Implement Company of Carrier Mills, IL, and later for Parks Implement Company of Marion. He then worked for Walter McDaniel of Crab Orchard, IL, as a truck driver for several years. He eventually became part of the Labor’s Union and the Carpenter’s Union beginning his long career in construction. He could do most anything pertaining to construction; working for Bill Oliver Masonry, Holmes Construction, Tom Hanley Construction and Blumenstock Construction. In 2002, he decided to slow down his career in construction and retired but still did smaller jobs in his spare time. He was a member of the Marion Church of Christ and the Carpenters Union. In his spare time, he enjoyed working on his farm, always having a project to do and taking care of his cattle. When he was younger, he enjoyed coon and fox hunting. He enjoyed listening to the old country music and going to Corn Bread Junction, near Tunnel Hill, IL, on Saturday nights with friends. He loved his family and always would enjoy the time they all spent together. The many memories created will now be cherished by those he leaves behind. He is survived by his son and daughter-in-law, Kevin and Connie Holmes of Creal Springs, IL; two daughters and one son-in-law, Kelli Holmes of Marion, IL and Kila and Randall Little of Creal Springs, IL; five grandchildren, Kayla Johnson of Washington, IN, Kerrigan Norris and her husband, Chris of Tuscaloosa, AL, Becky Johnson and husband, Garrett of Vienna, IL, Hadley Holmes of Creal Springs, IL, and Zachary Johnson of Stonefort, IL; great grandson, Mason Henry of Rosiclare, IL; great granddaughter, Maylee Johnson of Vienna, IL; brother and sister-in-law, Anthony and Linda Holmes of Creal Springs, IL; sister and brother-in-law, Brenda Sue and C. Wayland Swan of Marion, IL; sister-in-law, Sue Holmes of Marion, IL; sister-in-law and brother-in-law, Peggy and Don Richey of Crab Orchard, IL; brother-in-law, Teddy Edds of Crab Orchard, IL; special friend, Diana Walton of Marion, IL, other extended family and many friends. He was preceded in death by his parents, wife; daughter, Karen Ann Smith on July 4, 2016, and two brothers, Alan Holmes and Rudy Holmes as an infant. Arrangements were entrusted to Wilson-McReynolds Funeral Home, 900 North Court Street, Marion. The visitation was on Sunday, May 30, 2021, from 11:00 a.m. to 1:30 p.m. at the funeral home. Following the visitation, the funeral service was at 1:30 p.m. with Pastor Bill Brandstatter presiding. Special recorded vocal musical selections presented during the service were; “Daddy’s Hands” by Holly Dunn and “I’ll Fly Away” by George Jones. Interment followed next to his wife, Judy in Mount Pleasant Shed Cemetery located southeast of Marion, IL. Pallbearers were Brent Swan, Garrett Johnson, Zach Johnson, Chris Norris, Jeremy Borchelt and Phillip Swan. Military honors were accorded at the graveside by the members of the Heyde-Pillow V.F.W. Post No. 1301 of Marion, and members of the United States Army Funeral Honors Burial Detail at the cemetery. During the folding of the flag, “America the Beautiful” was presented as an instrumental selection. The flag was then presented to Gordon’s son, Kevin Holmes. After the military tribute the recorded vocal musical selection “Outskirts of Heaven” by Craig Campbell was presented. Also, Pastor Bill Brandstatter read a special poem he wrote titled “A Tribute to Gordon Holmes.” Following the committal service at the cemetery the family and friends gathered at Kevin and Connie’s home for a meal and continued time of fellowship and support. For those who preferred, memorial contributions were made to either “Marion Church of Christ” and/or “Mount Pleasant Shed Cemetery.” Memorial contributions also were mailed in care of Wilson-McReynolds Funeral Home, 900 N. Court Street, Marion, IL 62959. For additional information call the funeral home at 618-993-2131.

The family of Gordon "Chigger" Holmes created this Life Tributes page to make it easy to share your memories.