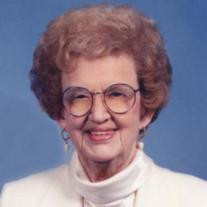 Grace Dusch Riggin, age 94, of Marion, IL passed away peacefully at 9:27 p.m., on Wednesday, May 2, 2012, at her home. She was born on Wednesday, March 13, 1918, in Carterville, IL the daughter of Rolla M. and Sarah Belle (Watson) Radford. Grace was first united in marriage to Marvin Dusch on August 14, 1937, in Wickliffe, KY and together they shared nearly fifty years of marriage until his death on March 2, 1987. Grace and Marvin were active members of the First Baptist Church of Marion where they both taught Sunday school classes for the young people and sang in the church choir. She later was united in marriage to Geddes D. Riggin on April 9, 1989, in Marion, IL and together they have shared twenty three years of marriage. Grace and Geddes both graduated from Carterville High School. Grace’s working career included clerical work at the ordinance plant during WW II and twenty seven years at Diagraph Industries as an office accountant until her retirement on December 31, 1981. Grace’s most fulfilling membership was her church family at Marion First Baptist Church, along with the Marion Women’s Club, the Daniel Brush Chapter of the D.A.R. and the Marion Memorial Hospital Auxiliary. In her spare time she enjoyed playing cards with her ladies group, traveling, shopping and visiting with her many friends. The family would like to thank all of Grace’s care givers for their compassion and loving care shown to Grace during her illness. She is survived by her husband, Geddes D. Riggin of Marion; three nieces Barbara (Radford) Clendenin of Marion, Barbara Jo (Dusch) McInturff and her husband, Paul and family of Creal Springs, IL, Marilyn (Donatt) Shotts and her husband, Don and family of Salem, OR; two great nephews Keith Clendenin and his wife, Martha of Pittsburg, IL and his children, Luke Clendenin and his wife, Amy and their son, Logan of Geneseo, IL and Kerry (Clendenin) Mason and her husband, Andy of Bloomington, IN and Steve Clendenin and his wife, Lisa of Marion, IL and their children, Matt and Curt Clendenin both of Marion, IL; step son, Don Riggin and his wife, Judy and their family all of Herrin, IL and many friends. She was preceded in death by her first husband, Marvin Dusch; sister, Velma (Radford) Rushing; two brothers, Cleo Radford and Velma’s infant twin brother; three sisters-in-law, Marie (Dusch) Donatt, Lucille Riggin and Sarah Radford; two brothers-in-law, Earl Rushing and Gordon Riggin and her nieces husband, Curtis R. Clendenin. Arrangements for Grace Dusch Riggin were entrusted to Wilson-McReynolds Funeral Home, 900 N. Court Street, of Marion, IL. A time of visitation for family and friends was on Friday, May 4th from 5:00 p.m. until 8:00 p.m. at the funeral home. The funeral service was at 11:00 a.m. on Saturday, May 5, 2012, at Wilson-McReynolds Funeral Home with Dr. Bob Dickerson presiding. Comments of memory were presented by Earl Ray Dungey and Roberta Blankenship. The prelude and postlude musical selections were presented by pianist, Julie Douglas. Special vocal musical selection presented was “Amazing Grace” by Elaine Hancock and was accompanied by pianist, Julie Douglas. Interment followed in the Oakwood Cemetery of Carterville, IL. Pallbearers were Keith Clendenin, Steve Clendenin, Luke Clendenin, Matt Clendenin, Curt Clendenin and Kerry Mason. Following the committal service at the cemetery the family and friends gathered at First Baptist Church of Marion, for a meal and continued time of fellowship and support. For those who preferred, memorial contributions were made to either “The First Baptist Church Building Fund” or “The Parkinson Association”. Memorial contribution envelopes were available at the funeral home, or were mailed in care of Wilson-McReynolds Funeral Home, P.O. Box 370, Marion, IL 62959. For additional information please call the funeral home at 618-993-2131.

The family of Grace Dusch Riggin created this Life Tributes page to make it easy to share your memories.

Send flowers to the Riggin family.