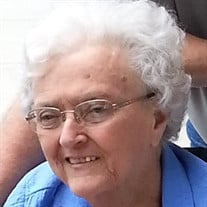 Hallie M. McIntosh, age 82, of Carbondale, IL, formerly of Marion, passed away peacefully at 3:45 a.m. on Thursday, January 5, 2017, in Manor Court of Carbondale. She formerly had also lived in the East Peoria, IL area for 17 years from 1970 until she returned to Marion in 1987. She was born on Thursday, September 6, 1934, at home east of Crab Orchard, IL the daughter of Rev. Waldo E. and Naomi (Turner) Richey. Hallie attended school in Crab Orchard and was a graduate of Crab Orchard High School. She continued her education by attending Paducah Business College of Paducah, KY. Hallie was first united in marriage to Samuel Otey on Friday, April 17, 1959, in Crab Orchard and together they shared 3 years of marriage until his death came suddenly on Monday, April 16, 1962. She later was united in marriage to Edsel Valjean McIntosh on Monday, July 13, 1970, in Washington, IL and together they shared 36 years of marriage until his death came on Tuesday, November 28, 2006. Hallie had worked as a secretary for several businesses of the area before she moved to the East Peoria, IL area. While living in East Peoria she worked at the First Baptist Church of Washington for 6 years She was a member of the Second Baptist Church of Marion. Hallie was always actively involved in the churches she was affiliated with and especially enjoyed working with pre-school children. While attending at Second Baptist she served as Director of the Birth thru 2 Year old Children’s Department and was known to all as “Miss Hallie.” In her spare time she enjoyed reading and loved to watch basketball, especially the Salukis. She also was proud to be a Republican always voting in every election and even to the last election in November. She loved her family and enjoyed the many times they all would be together. She was always interested in all of their many different activities, especially those of her grandchildren. The many memories that have been created will now be cherished by those she leaves. She is survived by her son and daughter-in-law, John S. and Verdonna Otey of rural Makanda, IL; two grandchildren, Warren Otey and his wife Emilee and Briana Otey all of rural Carbondale; three great grandchildren, Peyton Bryce Otey, Gabriel Hunter Otey and Brylee Rachelle Otey; two stepdaughters, Rhonda Breckenridge and her husband Charles of Preston, MS and Betty Clark of Philadelphia, MS; six step grandchildren, Rebecca Ferguson, Rachel McCollum, Joseph Lee, Shane Clark, Kristen Clark and Jeremy Clark, four step great-grandchildren; brother-in-law, Dean McIntosh and his wife Linda of Marion; sister-in-law, Rita Dale and her husband Gary of Montgomery, IL, other extended family and many friends. She was preceded in death by her parents and both husbands. Arrangements for Hallie M. McIntosh were entrusted to Wilson-McReynolds Funeral Home, 900 N. Court St., Marion, IL. The visitation was from 9:00 a.m. until 11:00 a.m. on Monday, January 9, 2017, at the funeral home. Following the time of visitation the funeral service was at 11:00 a.m. with Dr. Bob Wagner and Pastor Mark Mohler presiding. The prelude and postlude musical selections were recorded piano selections. Special vocal musical selections presented during the service were “Life’s Railway to Heaven” and “Sweet Beulah Land” both by Danny Ward who accompanied himself on the piano. Interment followed next to her husband Edsel, in Rose Hill Cemetery of Marion. Pallbearers were Warren Otey, Brian Davis, Phil Richey, Mark Norris, Scott Barger, Tom Hartwell, Pat Barger and Vance Schmid. Following the committal service at the cemetery the family and friends gathered at Second Baptist Church of Marion, for a meal and continued time of fellowship and support. For those who preferred, memorial contributions may be made to either or both; “St. Francis Animal Shelter” of Murphysboro or “Celtic Hospice” and mailed in care of Wilson-McReynolds Funeral Home, 900 N. Court Street, Marion, IL 62959. Memorial envelopes were available at the funeral home. For additional please contact the funeral home by calling 618-993-2131.

Hallie M. McIntosh, age 82, of Carbondale, IL, formerly of Marion, passed away peacefully at 3:45 a.m. on Thursday, January 5, 2017, in Manor Court of Carbondale. She formerly had also lived in the East Peoria, IL area for 17 years from 1970... View Obituary & Service Information

The family of Hallie M. McIntosh created this Life Tributes page to make it easy to share your memories.

Send flowers to the McIntosh family.