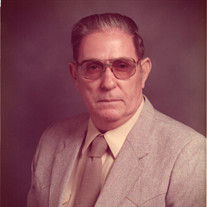 Harold V. “Bud” Angel, age 95, of Marion, IL passed away peacefully at 12:05 a.m. on Thursday, May 26, 2016, in Heartland Regional Medical Center of Marion. Bud, as he was known by, was born on Sunday, August 1, 1920, northeast of Marion near the Pleasant Grove United Methodist Church in Williamson County, the son of Moody Ray and Ida Emile (Fry) Angel. He attended school in Crab Orchard and was a graduate of Crab Orchard High School. Since Crab Orchard only offered 3 years of high school, he came to Marion to take his fourth year and was a graduate of Marion Township High School. Bud was united in marriage to Betty Ruth Bradley on Saturday, May 10, 1941, in Cape Girardeau, MO and together they shared over 47 years of marriage until her death on Thursday, August 18, 1988. His father, Moody and his uncle Leo Fry owned and operated the Cedar Hill Coal Mine, located south of Crab Orchard, and at the age of 13 he started working at the mine after school. His job was to go down into the mine and bring out the ponies and mules that were used and stake them out for the night. When his father passed away in 1943, he took over the operation of the mine and operated it until it closed in 1952. He then helped sink the Freeman No. 4 Coal Mine, also known as Orient No. 4, near Pittsburg and began working as their hoisting engineer and toward the end of his career as mine examiner until his retirement in 1982. He was a member of Zion United Church of Christ of Marion, but for many years has been attending at Crab Orchard United Methodist Church until his health declined. He was a member of District 12 Local Union No. 9878 of the United Mine Workers and Fellowship Masonic Lodge No. 89 AF & AM. He was a former member of the Shrine Club and Scottish Rite Masonic Bodies. In his spare time he enjoyed camping and was a former member of the Wally Byam Airstream Club. He also enjoyed reading, especially westerns and later in life doing leatherwork. His family was a very important part of his life and he was always interested and encouraged them in all of their activities. The many memories that have been created will now be cherished by those he leaves behind. He is survived by two sons and daughters-in-law, Ronald R. Angel and his wife Lori of North Little Rock, AR and Richard A. Angel and his wife Dana of South Elgin, IL; three daughters and sons-in-law, Mary M. Marks and her husband Loyde of Carterville, IL, Linda L. Main and her husband John of Marion and Sharon Douglas-Davenport and her husband Roger of Marion; nine grandchildren, Bradley Angel and his wife Cathy of Allen, TX, Ashleigh Angel of Eugene, OR, Christopher Marks and his wife Laurel of Jefferson City, MO, Michael Marks and his wife Kim of Troy, IL, Kevin Main of Billings, OK, Kerri Gray and her husband Delbert of Tonkawa, OK, Kathy Kloppe and her husband Dale of New Berlin, IL, Kami Root and her husband, Dirk of Springfield, IL and Staci Jansen of Highland, IL, 14 great grandchildren, 2 great-great grandchildren; sister-in-law, Martha Bradley of Springfield, IL; special niece, Armetta Beltz of Marion; two special great nieces who were like grandchildren, Angela Eaton of Paducah, KY and Ashleigh Benson of Marion, other extended family members and many friends. He was preceded in death by his parents, wife; sister, Helen Corder and son-in-law, Stephen Douglas. Arrangements for Harold V. “Bud” Angel were entrusted to Wilson-McReynolds Funeral Home, 900 N. Court St., Marion, IL. The visitation was from 5:00 p.m. until 8:00 p.m. on Saturday, May 28th at the funeral home. During the time of visitation a “Reflection of Life” DVD Memorial Tribute featuring special people, places and events in Harold’s life was presented to the family and friends. Masonic services were accorded during the time of visitation at 6:00 p.m. by Fellowship Masonic Lodge No. 89 AF & AM. Officers participating were Worshipful Master, Charles Adams; Chaplain, Bob Russell and Secretary, Pat Samples. The funeral service was at 2:00 p.m. on Sunday, May 29, 2016, at Wilson-McReynolds Funeral Home with Rev. Richard Sullins presiding. Family member, Josh Benson read comments of memory that were written by Harold’s children Sharon and Richard. The prelude and postlude musical selections were presented by pianist, Ann Smith-Graul. Special vocal musical selections presented during the service were “Red River Valley”, “Peace In the Valley” and “Going Home” all by Matt Throgmorton with pianist, Ann Smith-Graul accompanying. Interment followed next to his wife in Rose Hill Cemetery of Marion. Pallbearers were Delbert Gray, Mike Marks, Dale Kloppe, Matthew Gray, David Kloppe and Jake Gray. Following the committal service the family and friends gathered at Crab Orchard United Methodist Church for a meal and continued time of fellowship and support. For those who preferred, memorial contributions were made to either “Crab Orchard United Methodist Church" or “Hospice of Southern Illinois” and mailed in care of Wilson-McReynolds Funeral Home, P.O. Box 370, Marion, IL 62959. Memorial envelopes were available at the funeral home. For additional information please contact the funeral home by calling 618-993-2131.

The family of Harold V. "Bud" Angel created this Life Tributes page to make it easy to share your memories.