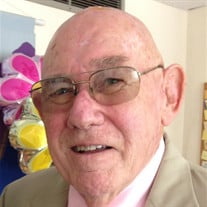 Rev. Dr. Harold George “Hal” Landwehr, Jr., age 76, of Marion, IL, passed away peacefully at 8:26 p.m. on Tuesday, December 27, 2016, in Herrin Hospital of Herrin, IL. He was born on Sunday, March 10, 1940, in Chicago, IL, the son of Harold G. Landwehr, Sr. and Gladys (Stephens) Landwehr. Hal grew up in Chicago and was a graduate of Gage Park High School and later a graduate of Elmhurst Illinois College class of 1964. Hal was involved in the Civil Rights Movement in the 1960’s while in college, and was an activist for social justice issues all of his life. He received his Masters of Divinity at Bangor Theological Seminary, Bangor, ME in 1967 and was ordained in the United Church of Christ in 1967. Hal continued his studies and received his Doctor of Ministry from the United Theological Seminary of Dayton, OH in1976. He was united in marriage to Phyllis H. Mambuca on Saturday, October 1, 1988, in Barnstable, MA and together they have shared over 28 years of marriage. For most of the past fifty years, Hal served churches in Quincy, MA; Scituate, MA; Malden, MA; Grand Junction, CO; Bridgetown, OH; Hamilton, OH; and was pastor of Zion United Church of Christ, Marion IL from 1998 to 2001. For the past years Hal and Phyllis have attended and worshiped with the congregation of the Church of the Good Shepherd in Carbondale, IL. While semi-retired, he served as interim pastor at various churches in the Missouri Mid-South Conference United Church of Christ, and was Chaplain at Marion Veteran’s Medical Center for several years where he felt blessed to work with veterans. Hal was an avid Ham Radio operator, and a member of the Ham Radio American Radio Relay League; a member of the Marion Lions Club and Lions International. He and Phyllis loved traveling in Europe and the United States; together they enjoyed boating on Cape Cod and visiting lighthouses around the country. Hal always liked to read, keeping himself spiritually inspired and informed. He is survived by his wife, Phyllis H. Landwehr of Marion, IL; son, Troy R. Landwehr of Portland, ME; daughter, Tammy E. Dewar of Merrimack, NH; grandsons, Anson, Luke and Rhys Dewar of Merrimack, NH; brother, Donald S. Landwehr, other extended family and many friends. He was preceded in death by his son, Todd H. Landwehr; parents, Gladys and Harold Landwehr, Sr. and sister, Janice Landwehr. Arrangements for Rev. Dr. Harold George “Hal” Landwehr, Jr., were entrusted to Wilson-McReynolds Funeral Home, 900 N. Court St., Marion, IL. The visitation was from 10:00 a.m. until 11:00 a.m. on Saturday, January 7, 2017, at Zion United Church of Christ, located at 930 West Cherry Street in Marion. During the time of visitation a “Reflection of Life” DVD Memorial Tribute featuring special people, places and events in Hal’s life was presented to the family and friends. Following the time of visitation the memorial service was at 11:00 a.m. with Rev. Kim Magwire and Rev. John Holst presiding. The prelude and postlude musical selections were presented by organist Doris Anderson. The reading of the scriptures was presented by Janet McCready. Special congregational hymns presented during the service were; “Immortal, Invisible, God Only Wise”, “In the Bulb There Is a Flowers” and “On Eagle’s Wings” all led by Diane Lazorchak with organist Doris Anderson accompanying. Special solo musical selection presented acappella was “Prayer of St. Francis” by Marisa Winegar. During the service, the Order of Holy Communion was led by Rev. Shana Johnson. Following the memorial service the family gathered in the reception area of the church for a meal and continued time of fellowship and support. Interment followed at a later date in Gethsemane Cemetery of West Roxbury, MA. For those who preferred, memorial contributions were made to “American Cancer Society”, or the “Michael J. Fox Foundation”. Memorial contribution envelopes were available at the church or were mailed in care of Wilson-McReynolds Funeral Home, 900 N. Court Street, Marion, IL 62959. For additional information please contact the funeral home by calling 618-993-2131.

The family of Rev. Dr. Harold George "Hal" Landwehr Jr. created this Life Tributes page to make it easy to share your memories.